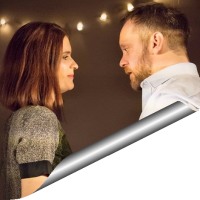 With no shortage of drama about the end of relationships, David Eldridge's new play at the Dorfman looks at a possible Beginning. It's 3am and Laura's (Justine Mitchell) flatwarming party has just ended; all the guests have left except one she only met tonight. Danny (Sam Troughton) is a friend of one of Laura's clients, and they've been flirting with each other across the room all evening. He hasn't quite picked up on the fact that she returns his interest though, or that she's engineered him being left behind alone with her. Even when she makes it clear she wants to have sex with him Danny is nervous and reluctant. The two end up getting to know each other better, as Danny reveals the reasons he's so reticent even to have a one-night stand, let alone something that could turn into a relationship with someone he seems to be making a real connection with.

I don't want to go too deeply into the plot points of what is, ultimately, a very strong character piece; the pair's hangups and histories may not be entirely unpredictable, but the joy is in the way they're revealed. 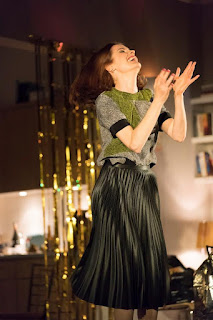 Beginning is very funny right from the start, Laura's forthrightness about what she wants and Danny's panicked response to it opening in classic romantic comedy territory. Polly Findlay's production never loses this sense of a successful rom-com (Danny starting to clean the flat as a diversionary tactic, or suddenly stopping dancing when Bros come on and Laura obliviously keeps going,) even as we find a lot more depth in the characters. They feel like fully-rounded people - Danny perhaps a bit more so than Laura - whose anxieties mirror each other's: Company MD Laura has a façade of being married to her job and not being jealous of her friends' family photos on Facebook; Danny by contrast exaggerates his Essex-boy persona and downplays his own intelligence as a defensive strategy. 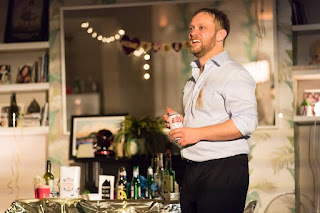 Fly Davis' set realistically brings to life the flat Laura hasn't decorated yet, a bombsite after the party, setting the scene for Findlay's naturalistic production which stays fun and refreshing throughout, even when it's quietly heartbreaking. And in the middle of it all Mitchell and Troughton bring life to Eldridge's characters and make you care about them; by the end you may not be convinced Laura and Danny are really right for each other, but you dearly want them to make a go of it.

Beginning by David Eldridge is booking until the 14th of November at the National Theatre's Dorfman.