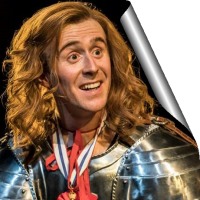 To Rory Mullarkey falls the dubious honour of giving the Olivier stage its best piece of new writing this year; a bar set so low the only challenge it could provide is in a limbo contest. Straight after I saw Albion, another play's title gives away the fact that it'll touch on English identity in the face of Brexit, as Mullarkey gives us his centuries-spanning, epic twist on Saint George and the Dragon. John Heffernan plays failed dragon-slayer George, who returns to the country of his birth only to find that one of the creatures he's been running from has taken up residence there too, turning it into a dark place in constant fear. Charles (Gawn Grainger) begs the knight to slay the beast, but it's only when he sees and instantly falls for Charles' daughter Elsa (Amaka Okafor) - who happens to be the Dragon's next meal - that he agrees to challenge him.

In a structure that once again shows how influential Caryl Churchill's Cloud Nine has been - so influential that audiences don't even find the twist unusual - the three acts each take place one year apart, but centuries separate them historically. 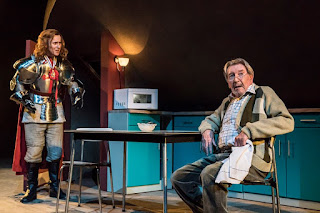 So George is called away from the mediaeval setting by a mysterious Brotherhood, to fight with them after he's defeated the Dragon; when he returns the village has become a town in the middle of the Industrial Revolution, and his old adversary has returned in the form of a factory owner whose profit-driven control of the town is as deadly as the annual sacrifices ever were. And after the interval George comes to a present-day city, where the dragon's presence has finally established itself in the people themselves. 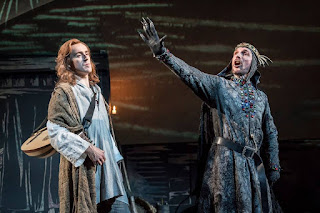 I'd be lying if I said I didn't enjoy Saint George and the Dragon but tonally it's all over the place. Rather than try to avoid it, Lyndsey Turner's production embraces the possibility for this to become a big-budget panto - I noticed Mullarkey keeps the language pretty clean, presumably to make this an option for kids - and nowhere more so than in Julian Bleach's hissing panto villain of a Dragon. Hey, you hire Davros, you know what you're going to get, and there's no question Jafar's Bleach's every appearance is a scene-stealer. But with the heavy metaphor always present the production always has the uncomfortable feeling of only just getting away with it: As decapitated dragon heads crash spectacularly onto Rae Smith's lovely faux-naïf set, it feels like half the audience are laughing with the show, half at it. 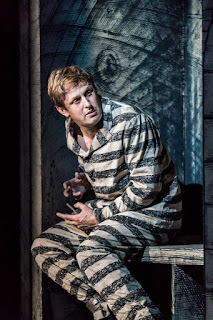 The Heff leads a joyous cast though, throwing their all into it; his George is a simpleton whose enthusiasm eventually does more harm than good, while Richard Goulding (for once not playing Prince Harry, but at least playing a character called Henry so he doesn't feel too out of his comfort zone,) is the Cassandra voice of common sense as the Dragon's reformed lackey. A large cast of villagers carry through the story's centuries, Jeff Rawle's Brewer always inevitably the one they focus around as he runs the pub. There's some nice through-lines to their characters, like Jason Barnett's Town Crier being a newspaper publisher by the industrial age, and Conor Neaves' jailor, being secretly taught to read by Henry in the second act, and having become an insufferable pseudo-intellectual by the third. 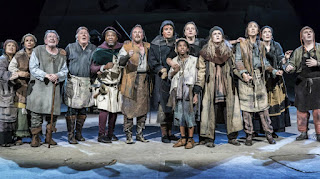 Tamzin Griffin's Healer, Stephanie Jacob's Miller and Olwen May's Butcher suggest the voice of stability through the centuries has always been female, and in a small role Kirsty Rider stands out as the explosion-loving Alice. Ultimately Mullarkey seems to be saying that perhaps the Dragon was the real English identity all along, and Saint George just a hopelessly rose-tinted vision of what it could be. It's an undeniably strange play and one that doesn't hold together too well, but the energy and commitment thrown into its constituent parts often reaps rewards.

Saint George and the Dragon by Rory Mullarkey is booking in repertory until the 2nd of December at the National Theatre' Olivier.