Theatre review: The Box of Delights 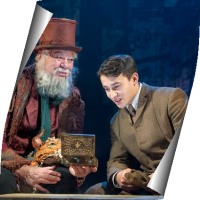 The Box of Delights was, for me, one of those things from childhood I'd completely forgotten about until a stage version was announced, and I suddenly remembered loving the slightly sinister 1984 TV adaptation. I'm normally worried about seeming a bit creepy turning up to kids' shows on my own but staging this at Wilton's Music Hall with a big-name creative team - Justin Audibert directing, Tom Piper designing - made this a memory lane trip I didn't want to miss. I needn't have worried about standing out, as with the majority of tonight's audience being in their forties I think this is largely attracting people for the same reason. Not that those children who were brought along didn't seem to be entirely enchanted as well by a production whose simple aesthetic fits in as well with the faded grandeur of its surroundings, as John Masefield's alternative Christmas story itself does.

Alistair Toovey plays orphaned Kay Harker, robbed of his pocket money on the way back to his guardian's home for Christmas. But on the same journey he also meets mysterious magician Cole Hawlings (Matthew Kelly,) who's been alive for millennia guarding a mystical treasure. 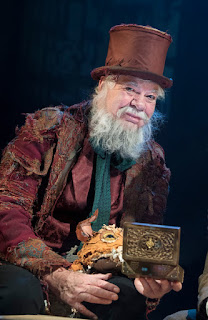 Cole meets Kay a few times to establish that he is, as his friends and teachers frequently despair, a dreamer, which makes him a suitable guardian for the Box of Delights, created by his rival Abner Brown (also played by Kelly,) who's been trying to get it back for evil purposes. Cole is soon captured by Abner, who sends his henchmen Pouncer (Josefina Gabrielle) and Charles (Tom Kanji) to find out where he's hidden the box. Kay teams up with his gun-obsessed, tomboyish friend Mariah (Safiyya Ingar) and her bookish brother Peter (Samuel Simmonds) to keep the box safe and, in a sequence of events that to be honest only barely makes sense, save Christmas. 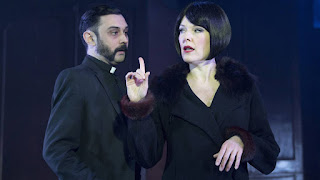 Piper's design takes its inspiration from the music hall's peeling paint to give us a stage covered in dust sheets that gradually get taken off to reveal tea chests, trapdoors and numerous wardrobes that provide concealed exits and entrances, and the simple stage effects used fit in with the story's between-the-wars setting. Not that it doesn't at times have a pleasingly modern feel - its child protagonists are a girl who takes the action hero role, and two boys happier in dreams and books (the best gag comes between the opposing sides' fierce females, Mariah and Pouncer: "Where did you learn to assemble a gun so quickly?" "I was raised by nuns.") And if it's lifted straight from Masefield's 1935 novel then there's a bit of a subversive, for the time, recurring reference to the two magicians dating from pagan times, and insistence that Christmas long predates Christianity. 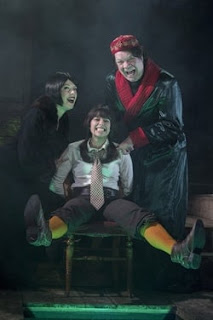 Piers Torday's adaptation does get a bit stuck trying to unravel Masefield's plot (he's a novelist whose first foray into playwrighting this is, and it sometimes shows,) and although beautifully staged with a huge flowing cloth creating a flooding river, the finale is hard to understand (this may be partly because I was sitting to the side of the gallery, and the acoustics weren't great at times, meaning I didn't hear much of the explanation of what was going on.) But right from the use of the TV series' theme tune as the sound of the titular box I was bound to be a fan; story, production and venue are perfectly matched, and if its storytelling is messy at times it's got charm to spare.

The Box of Delights by Piers Torday, based on the novel by John Masefield, is booking until the 6th of January at Wilton's Music Hall.