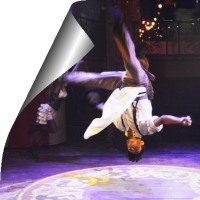 One thing you can usually expect from the Menier Chocolate Factory is a pretty safe palate and a commercial sensibility, so it’s a surprise to see them spaff a big budget and their Christmas show on a gamble, and one that doesn’t pay off at that. Maybe it’s a reflection of Cy Coleman (music,) Michael Stewart (lyrics) and Mark Bramble’s (book) hero and his tendency to lay the big decisions in his life on the toss of a coin that’s led Gordon Greenberg’s production to cast Marcus Brigstocke in a part he has no obvious qualification for, the titular role in Barnum. The 19th century impresario P.T. Barnum was given the name (most likely by himself) The Greatest Showman, and the musical follows his earlier forays into show business (his co-founding of Barnum & Bailey’s Circus is pretty much the show’s epilogue) and his relationship with his wife Charity (Laura Pitt-Pulford,) who provides the nous behind his flair for spectacle.

Not so much a fluid story as a series of incidents, Barnum takes us through a number of Barnum’s schemes, all put together with what he called “humbug” and most people would call being economical with the truth. 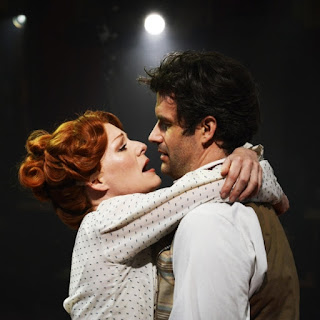 Some of his early stars get their own musical numbers: The elderly Joice Heth’s (Tupele Dorgu) age is exaggerated to 160 and she’s exhibited as George Washington’s wet-nurse; a tiny man is renamed General Tom Thumb, and he gets an athletic song-and-dance routine from Harry Francis. Celinde Schoenmaker is in powerful voice as Jenny Lind, the Swedish opera singer Barnum is determined to turn into a mainstream hit, and who he wrongly suspects wants to have an affair with him. But apart from Pitt-Pulford, whose support is as invaluable to the production as her character’s is to Barnum, these are only isolated numbers. 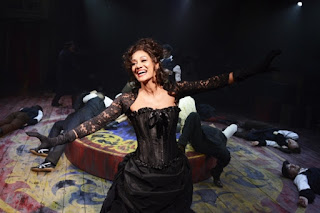 Most of the show rests on Brigstocke, and he’s not the man to carry it. His acting, singing and dancing is all just about competent – I overheard someone in the interval calling him “a triple non-threat” – and the famous tightrope walk at the end of the first act is downright beyond him: He had to restart twice, eventually only managing it with one of the ensemble holding his hand for balance. He brushes off some of these problems with a certain amount of charm, but it would take a vast amount of raw charisma to bluff your way through a role like this, and while I generally like him as a comedian, if you mentioned his name to me I’d mainly think of him as someone who’s very fond of cheese and doesn’t care who knows it. I blame whoever convinced him to take the job rather than Brigstocke himself, who’s clearly putting a huge amount of work into getting this right, but then shouldn’t this look effortless? There’s a lot of audience goodwill behind him but it’s still an uncomfortable experience to see someone so out of their depth. 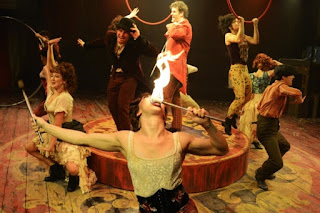 It all means the show is unusually dependent on the ensemble to carry it, and on top of their singing and dancing their circus skills – tumbling, juggling, fire-eating, magic - does look effortless. It’s not that well-presented though: The Menier doesn’t really suit playing in-the-round, at least not in the way Paul Farnsworth has configured it. I was more or less behind a pillar, and the entire seating bank was facing off-centre from the action. Much of the spectacle came across, but a lot was just out of sight, and anything that happened on the balcony I can only guess at. Most of Tom Thumb’s number I saw from behind, although in Francis’ case this didn’t exactly make for a bad view. As the title of my blog suggests, I’m used to dodgy sightlines but I’d expect them in the cheap seats of an elderly theatre, not at Menier prices in a space that can be reconfigured to order. Good work being done by a hard-working ensemble, then, but without an explosive performance at the centre the production really shows up the fact that there’s not a hell of a lot to Bramble’s story.

Barnum by Cy Coleman, Michael Stewart and Mark Bramble is booking until the 3rd of March at the Menier Chocolate Factory.