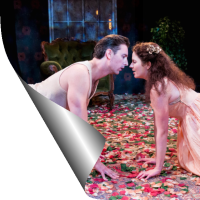 J. M. Barrie’s Dear Brutus may take its title from Julius Caesar, but the Shakespeare play it borrows most overtly from is A Midsummer Night’s Dream. Lob (Robin Hooper) is a puckish – literally – old man who’s invited a group of strangers with one thing in common to spend the week at his home. As his guests try to figure out what their mysterious common characteristic is, they hear a local legend of a magical wood that appears in a different spot every Midsummer’s Eve; anyone who enters it is never seen again. The enchanted wood does appear, of course, and most of the guests do enter it, but in a three-act structure that’s like a much better-done version of The Passing of the Third Floor Back, they do all emerge again, all changed to varying degrees. This is a play full of wild variations in tone, as what each group of characters discovers in the wood is very different.

What they have in common is that they all believe they took a wrong turn in life and wish for a second chance; the wood gives it to them, showing them what their alternative lives could have been for one night. 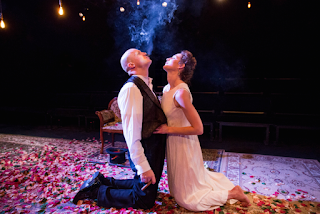 But as the quote that provides the title suggests, the fault might not be in their circumstances but in their characters: Thieving butler and occasional bubble-bath Matey (Simon Rhodes) believes he’d have been honest if he hadn’t become a servant; his alternate self is a senior civil servant married to Lady Caroline Laney (Helen Bradbury giving nice distinction between her acidic real self and wild midsummer self,) but it just means he steals on a grander scale. In the funniest segment, and the most reminiscent of A Midsummer Night’s Dream’s lovers, John Purdie (Edward Sayer) is cheating on his wife Mabel (Bathsheba Piepe) with Joanna (Charlotte Brimble) – if only he’d met Joanna first. In the woods, he has met and married her first, and wishes he were married to Mabel instead. The lesson he needs to learn is that he’s just not a particularly loyal or honourable person. 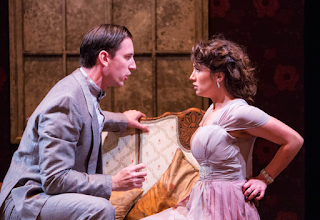 In the play’s most wistful strand Alice (Emma Davies) is unhappily married to the alcoholic Will Dearth (Miles Richardson,) and they wonder if a child would have made them happier. In their alternate path Alice has married even worse, but Will has a daughter, Margaret (Venice van Someren,) who’s given his life purpose. Although sweet this element of the story does drag on a bit, while on the other hand Mr and Mrs Coade’s (James Woolley and Josie Kidd) story feels a bit thin, but for the most part Jonathan O’Boyle’s production manages to balance the wild fluctuations in tone that Barrie throws into the mix. 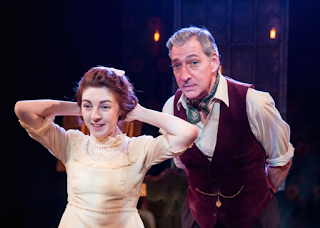 By far the strongest element is the frantic comedy of the philandering younger people, which both in the daytime and enchanted wood scenes come straight in at a pitch of hysteria, with Sayer getting a lot of good lines at the expense of his character’s lack of self-awareness. There’s witty moments elsewhere as well but the rest of the play largely aims for more of a mystical, romantic tone, with Anna Reid’s traverse design and Peter Harrison’s lighting contributing the necessary air of magic that breaks into a Edwardian sitting room. It is without doubt an utterly bizarre play, whose deliberate ambiguity is added to by its constant changes of tone, but O’Boyle’s production wrangles it all well, and it was a hit with tonight’s audience*.

Dear Brutus by J.M Barrie is booking until the 30th of December at Southwark Playhouse’s Little Theatre.

*particularly the Spanish woman sitting behind me. Sayer didn’t really do much for me but judging by the “Ay ay ay!” when he ran onto the stage in his vest and pants he’s got at least one fan.
Posted by nick730 at 22:40