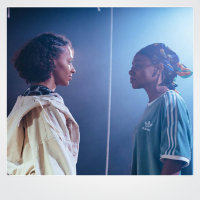 One of the advantages of middle age is being able to more or less ignore anything to do with the Kardashians, but it's impossible to be online and not osmose some things about them. Funnily enough, one of those things is the specific headline that kicks off the events of Jasmine Lee-Jones' Seven Methods of Killing Kylie Jenner: The preposterous statement that the titular enemy of the gays* was the youngest-ever "self-made" billionaire, as if the wealth, privilege and profile she was born into weren't a factor. For student Cleo (Danielle Vitalis) this is more than just ridiculous but also a slap in the face, as she considers Jenner's personal brand to be built on appropriating black looks and culture, something which has been particularly on her mind both as the subject of her dissertation; and because her ex just dumped her for a white woman with a Jenner-like tendency to appropriate black style.

Her immediate response is to start tweeting a thread of her seven ideas for taking fantastical revenge on Jenner from her anonymous account. A black woman's joke threats against a white woman are taken predictably seriously, and soon Cleo's the one getting death threats for real. 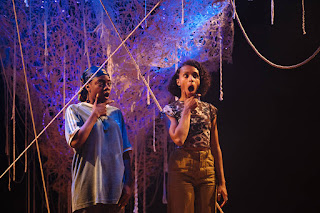 Seven Methods of Killing Kylie Jenner is a witty, insightful and angry look at cultural appropriation and racism, as well as at how easy it is to end up in the middle of a Twitterstorm, but what makes it really work is that it's at heart a story about friendship, as Cleo's best friend Kara (Tia Bannon) turns up at her house soon after the controversy erupts. She's there for support, but soon finds herself under attack as the multiple frustrations that have built up in her friend mean she's picking at old grievances that Kara thought long-forgotten. 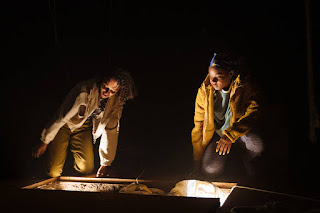 I'm always interested to see how the theatre responds to trying to put the online world onstage, something the Royal Court in particular keeps going back to - and like Teh Internet is Serious Business, Milli Bhatia's production completely eschews the option of having screens and visible tech do this, going instead for the purely theatrical: In fact Seven Methods is quite the showcase for its cast's talents, as Vitalis and Bannon zip through dozens of accents and personas every time the Twitterstorm blows up again, bringing us the reactions both supportive and aggressive to Cleo's tweets. The only web we actually see is the one knitted out of ropes that dominates Rajha Shakiry's set, which moves and seems to threaten to engulf the characters - not when the online threat starts to seem like it can become real, but when their own relationship shows cracks. 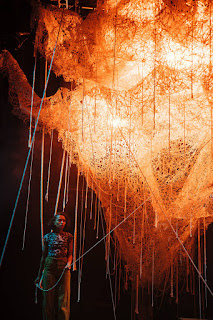 The play also feels very up-to-date in the way that people's online past is now being used against them, and sure enough Cleo's wokeness is soon being questioned when homophobic tweets from her teens are dug up; it's a further dig in the real-life arguments as it opens old wounds from when Kara attempted to come out to her friend. But while it takes its subjects seriously, Seven Methods never takes itself seriously - as when the conversation comes to an impasse, and tumbleweed made of old wigs rolls across the stage - meaning it's a reliably entertaining ninety minutes that makes you care about the characters and, by extension, the subjects that matter to them most.

Seven Methods of Killing Kylie Jenner by Jasmine Lee-Jones is booking until the 27th of July at the Royal Court's Jerwood Theatre Upstairs.

*she attempted to copyright the name "Kylie," disrespecting La Minogue, which is homophobia at its finest
Posted by nick730 at 22:04