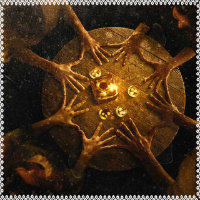 Hot on the heels of Preludes another Dave Malloy musical makes its London debut, as does the venue where it plays: The Boulevard Theatre is built on the site of a long-lost theatre of the same name in central London; the website says the Boulevard “sits in the centre of Soho’s infamous streets and alleyways,” and I don’t know that I would have personally led with a reminder of the chances of getting mugged but hey, you do you. The building was formerly the Raymond Revue Bar and still has a massive sign for it on the wall, but once you run the gauntlet of shops selling poppers and Viagra the inside is less tits’n’minge, more the looking-like-a-mid-range-hotel feel that the front of house areas of new-build theatres always go for these days. The auditorium itself is promising though – the seats are comfortable with actual leg room, and the venue looks well-equipped and flexible: Simon Kenny’s design puts us in the round but it looks like various other layouts would be possible without losing the good sightlines.

But is the venue a bit too slick and new for a show called Ghost Quartet? Bill Buckhurst directs Carly Bawden, Niccolò Curradi, Maimuna Memon and Zubin Varla as they sing and play multiple instruments through interlinked supernatural stories. 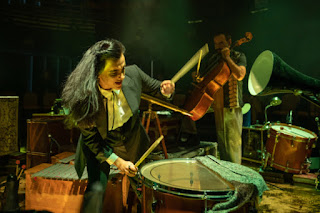 The show is described as a song cycle, which seems fair – you’d certainly be hard-pushed to find anything even remotely resembling a narrative. It’s structured as a double album, with the actors announcing what side of the LP we’re on, the track number and title before launching into each song, and we get various threads going on. Bawden and Memon carry most of the roles because the stories keep coming round to pairs of sisters, at least one of whom usually turns out to be dead. The idea of photographing a ghost recurs, and we open with Bawden as a woman who’s smashed her camera after taking one such photo. She goes to a camera shop to replace it, but instead the shopkeeper (Memon) shows her a violin her grandmother made out of her sister’s bones. Also, there’s a bear that demands honey and the ghost photo, but mainly honey, “The Fall of the House of Usher,” a woman gets pushed in front of a New York subway train while distracted by her phone, and Scheherazade turns up. 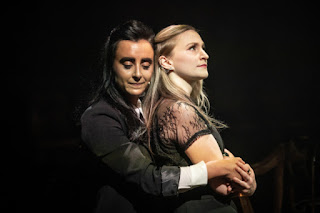 I couldn’t tell you what happened in any one of the four story strands that weave around the evening, let alone how they all tie up with each other, other than the fact that they hint at some kind of cyclical nature, the sisters being reincarnated throughout time and playing out different versions of the same story. Not that I minded that too much – I was baffled and as a result not particularly invested, but for much of the show I enjoyed Malloy’s eclectic music, which takes in folk, gospel, waltzes and snatches of more specific homages, like Varla playing a Thelonious Monk sequence on the piano when he claims the jazz musician’s ghost is hiding behind a door backstage; the Scheherazade stories also give an opportunity to reference Rimsky-Korsakov. 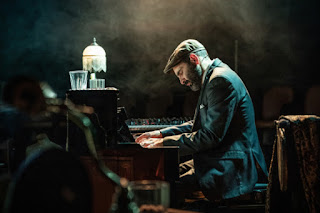 But somewhere around the one-hour mark it all started to try my patience; it probably didn’t help that the temperature in the auditorium had started to drop, but despite Kenny’s cluttered set suggesting an evening of eerie secrets and ghost stories, metaphorical chills never materialise to join the literal ones. Ghost Quartet contains way too few actual ghosts and grotesques; the cast warmly welcome the audience into the inner circle but there’s never that moment where they pull the rug out from under us. Instead they hand out glasses of whisky (the smell of which probably didn’t help either to be honest, even when I used to drink it made me queasy,) and eventually invite members of the audience onto the stage to take their place – an ending I’m now imagining being done as a frightening twist in a creepier kind of ghost story, but which here is used to provide a coup de théâtre. But in the end what really happened was that I stopped enjoying the music, which had been the main strength until it started to twist into the discordant sounds I associate with so many off-Broadway musicals. I found a lot to like early on, but for me sadly Ghost Quartet fizzled out.

Ghost Quartet by Dave Malloy is booking until the 4th of January at the Boulevard Theatre (6 Walker's Court , Soho, London W1F 0BT.)