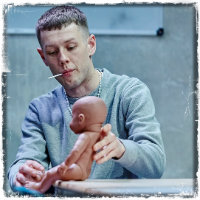 Papatango award winners have tended towards some pretty bleak plays in the past, but while this year’s winning entry goes to some nasty places – both metaphorically and literally – its overwhelming tone is of a very dark comedy. Samuel Bailey’s Shook takes place in the small classroom of a young offenders’ institution in London, where the teenage inmates can’t study for the GCSEs their peers on the outside are taking except in special circumstances, but they are required to fill their time with vocational classes, as well as on other subjects that could help them in the outside world and stop them from returning in the future. For those inmates who are, or are about to be, teenage dads, Grace (Andrea Hall) is starting a class on how to care for the baby once they get released; Bailey’s play rarely takes place during the sessions themselves, but usually catches up with the three boys just before or after class.

It may not be an adult prison but the inmates still seem to be subject to regularly getting moved from one institution to another; Cain (Josh Finan) was moved here after his local facility in Liverpool closed, and hasn’t had a visitor since he arrived. 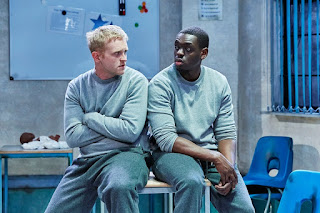 He’s quick to try and make his mark on newcomer Jonjo (Josef Davies,) aggressively making sure he knows he’s not someone to be messed with, but the suspicion that he’s all talk is confirmed when the third member of the class arrives and, despite Riyad’s (Ivan Oyik) mild-mannered exterior, Cain cowers. The three boys aren’t particular friends but they gradually become so over the weeks they come back to class, and we get to know a bit more about the similarities and differences in the backgrounds that brought them there. Cain is the repeat offender whose bravado masks despair at the fact that he’s likely to spend the rest of his life in and out of prison. On the other end of the scale, Riyad may have a complicated chequered history with gangs in various facilities - that’s only ever referred to obliquely in hushed tones - but as far as the adults are concerned his intelligence makes him the most likely to eventually escape the cycle of crime. 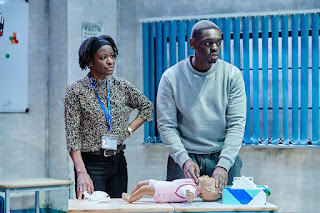 The fact that this is a cycle is a recurring theme; Riyad remembers visiting his own father in prison as a child and doesn’t want his son to do the same. In reality, the chances of any of them being allowed much access to their children seem slight, and learning how to hold and feed babies is unlikely to be much use anyway given their kids will be older by the time they get out. The parenting classes are more about the boys feeling like they’re doing something to avoid their own children being caught up in the same situation they did, than about their likely practical application. 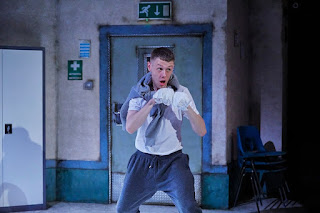 Both stopping this from getting too depressing and making sure we care about the characters is the fact that Bailey writes them full of quick wit and bluster. Finan inevitably steals George Turvey’s production as the motormouthed Cain, generally blurting out lines at such a pace it’s hard to know how he finds time to breathe; but Riyad and even the introverted Jonjo get their share of barbed comebacks. By contrast Grace isn’t particularly developed – it’s largely by necessity, as it’s made clear she’s not allowed to get too personal with her students, but it’s still a notable imbalance between the characters. But of course the focus always had to be on the young offenders, and Shook does a good job of making us empathise with and even like teenagers whose lives have been defined by some pretty dark actions.

Shook by Samuel Bailey is booking until the 23rd of November at Southwark Playhouse’s Little Theatre.