Theatre review: I Wanna Be Yours 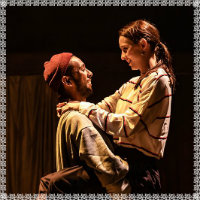 There’s a telling moment in Zia Ahmed’s I Wanna Be Yours, where poet Haseeb (Ragevan Vasan) goes on a playwrighting course aimed at encouraging more minority voices, and finds that every attempt to write about the everyday, casual racism he experiences as a Muslim is rejected, and he’s told instead to focus on bigger issues of global politics and terrorism. In that context his bittersweet romantic comedy about an interracial relationship feels like a deliberate pushback against that mindset about what people want to see in the theatre, avoiding the grand tragedies and sticking instead to the way the little daily discriminations build up to become exhausting (there is a reference to a terrorist attack on a mosque, but mainly in the context of Haseeb having to miss a dinner date so he can console his mother.) The main focus is on his relationship with Ella (Emily Stott,) an actress he meets when she leads another workshop aimed at making poets more confident reading their own work in public.

Their spark is instant, and they make an immediately likeable couple who initially shrug off the ways their relationship is affected by race – the most frequent sign is Haseeb constantly being mistaken for a drug dealer at Ella’s friends’ parties. 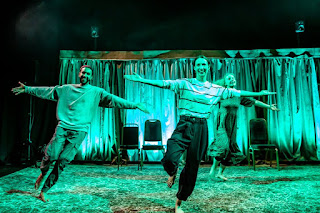 Their relationship is defined instead by the running gags they share – a love of incredibly cheesy songs, North London-born Haseeb’s dislike of South London, where Ella and her brother moved from Leeds – and despite the production’s physical style meaning the two actors don’t get hands-on with each other Stott and Vasan have a chemistry that makes you want things to work out for them. Their families are initially refreshingly welcoming, but cracks do start to show – Ella’s mother dropping little remarks about Haseeb’s “community,” Haseeb’s aunt muttering in Urdu whenever she sees Ella, and both of them having doubt cast on the relationship by their friends. As the naturalistic opening gives way to a more surreally poetic way of storytelling, the elephant in the room becomes a literal one as an ornament comes to life and starts slowly but surely growing. 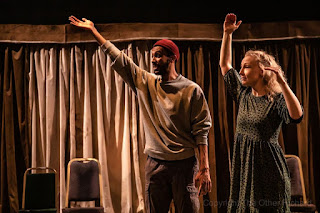 Anna Himali Howard’s production is the second I’ve seen in a week to fully integrate sign language – Rachael Merry provides BSL translation but also becomes part of the play’s physical language, acting as intermediary, obstacle or avatar between the couple. I Wanna Be Yours may be thematically about racial tension but the story isn’t, which is why it’s so effective at putting its message across: It works very well as a witty, heartwarming romantic comedy, with race as a kind of background, tapping incessantly at their happiness until it can’t be ignored any longer, and putting at risk a relationship that seems to have few other reasons not to get its happy ending.

I Wanna Be Yours by Zia Ahmed is booking until the 18th of January at the Bush Theatre’s Studio.