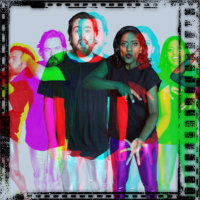 The Royal Court has long been at the forefront of trying to put the online world on stage – most recently Seven Methods of Killing Kylie Jenner was an award-winning hit – and now Eve Leigh’s Midnight Movie plunges us into a sleepless night’s distracted browsing. We never meet the play’s protagonist, instead we follow Avatar 1 (Nadia Nadarajah) and Avatar 2 (Tom Penn) as they tell loosely connected stories, some funny, some mystical, many with a creepy edge. The starting point is a YouTube video of a woman in a hotel elevator appearing to fight an invisible monster; when she reached the top of the building she disappeared, only to be discovered months later, drowned in a water tank the laws of physics suggest she couldn’t have got into on her own. It’s a mystery that’s consumed a lot of people’s time, including the narrator’s, who’s obsessed with finding out what really happened; but investigating it online has pitfalls.

Namely that clicking on a link can take you to something only tangentially connected, which could start off a whole new train of thought. Like a legend about a Hindu god of strength tricked into drinking the world’s oceans, or the news story about two women tricked into assassinating a dictator’s brother by being told they were on a foreign TV prank show. 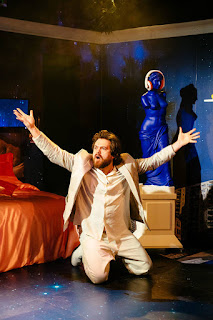 Recurring throughout the show is the story of “Blue Whale,” an anonymous online predator who got teenage girls to agree not only to predictable things like sending sexual images, but also to surreal and sometimes dangerous dares; as well as the drive-in audience at the titular midnight movie, in which a refugee telling a harrowing tale of loss segues weirdly into soft porn. Jumping abruptly around stories like clicking on different browser tabs, it’s variously political, fascinating, filthy, irritating, heartbreaking, funny and sinister – which makes it a pretty accurate depiction of a few hours browsing the internet. Some of the above stories I had already heard of, which adds the unnerving element of wondering just how much of Leigh’s sinister world she ripped straight out of reality. 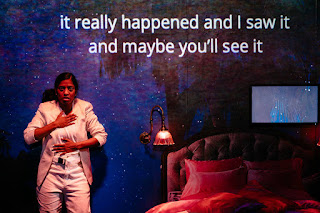 There’s a lot of talk about “digital bodies,” and the show’s meaning starts to crystallise as we find out more about the narrator, and how the two avatars are able to travel with a freedom she’s not able to in real life; while there’s a lot of venturing into the darker corners of the internet, and a sense of the despair that sends you into a night-long session like this in the first place, Midnight Movie also celebrates it for its ability to transport people with physical or mental disabilities who, a couple of decades ago, would have spent their sleepless nights without that form of escape. In keeping with this theme of accessibility it makes sense how this is built into the storytelling, with the narration coming in three forms: BSL from Nadarajah, spoken English from Penn, the dialogue also forming the central element of Joshua Pharo and Sarah Readman’s video design. 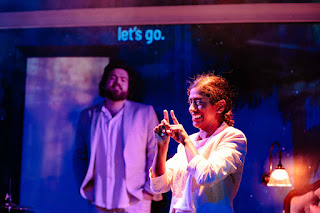 All of this feeds into the quirkiness of Rachel Bagshaw’s production, which for the most part manages to juggle the tonal shifts, even if it takes a little too long for the real context of what’s going on to be revealed. Cécile Trémolières’ design likewise lightens some of the more disturbing stories with odd touches – water is a theme connected to many of the stories’ dark twists but when it appears on the set there’s usually a rubber duck floating in it. It takes a little while to tune into Midnight Movie, and like clicking an unfamiliar link you won’t always like where it takes you, but it’s an inventive and distinctive take on a night of feverish browsing.

Midnight Movie by Eve Leigh is booking until the 21st of December at the Royal Court’s Jerwood Theatre Upstairs.