TV review: Talking Heads - A Lady of Letters /
An Ordinary Woman / Soldiering On 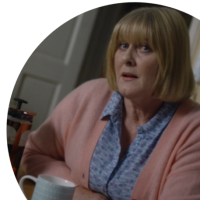 I can't realistically brand the new Talking Heads as "stage-to-screen" since they originated on TV in the first place; but Alan Bennett's beloved '80s and '90s monologues have occasionally been produced on stage as well, and this new lockdown version corralled by Bennett's regular collaborator Nicholas Hytner features a new collection of current and future dames who are mostly stage regulars, and some big theatre names directing. So I think we can call them stagey enough to keep my blogging muscles exercised on. Monologues filmed on an existing set - the Eastenders complex - are a clever way of making socially-distanced TV without resorting to the ubiquitous Zoom calls, and while I agree that giving some out-of-work playwrights the job of creating new ones might have been a better way of supporting talent, there's nothing stopping the BBC from doing that as well, and if something's acclaimed as a modern classic it should be able to stand up to reinvention.

Ten of the twelve monologues that comprised 1988's Talking Heads and 1998's Talking Heads 2 have been remade, with the exception of the two Thora Hird ones; presumably because however careful you are, carting a couple of age-appropriate dames to Elstree and back for a few days' filming wouldn't quite have been in the spirit of protecting the vulnerable. These have been replaced with two new monologues; I'm planning on watching them as double or triple bills, although with them tending to go to some very dark places that may end up being a bit much in one go. 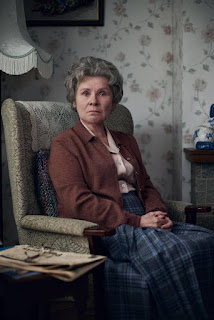 The opening three episodes include one of these premieres plus two from the first series: Imelda Staunton steps into Patricia Routledge's shoes to play Irene Ruddock in A Lady of Letters, directed by Jonathan Kent. A spinster who nowadays would spend her days online as a notorious troll, Irene is proud of her involvement in the community through the letters she sends complaining about hearse drivers smoking at funerals, hairs found in sausages, and suspicious activity among her neighbours. But most of the talking heads are unreliable narrators, and it's the latter collection of letters that she's not telling us everything about: They're what used to be called Poison Pen Letters, sent to her neigbours themselves, and it's an addiction she can't quit even after the police intervene. Bennett himself has admitted that it relies heavily on his own ignorance and romanticised view of the realities of prison, but it does powerfully make his point about how it should ideally be a place for improvement: Staunton isn't an actress afraid of making herself unlikeable, and this iteration of Irene barely tries to disguise the satisfaction she gets from hurting others under a mask of neighbourly concern. But in one of the more uplifting Talking Heads, being forced into the company of the kind of people she's feared and demonised all her life gives her empathy for the first time, and Staunton makes it a physical transformation. 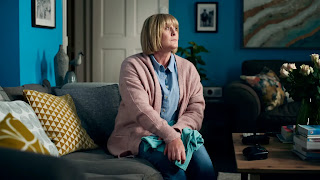 Bennett's image as a cuddly national treasure belies, or ignores, the amount of times his work goes to dark places, notably with reference to paedophilia: There's Playing Sandwiches of course, which will be returning in this series, and even The History Boys, voted the nation's favourite play, revolves around a high school teacher groping his students' nuts to little more than general amusement. Still, this series' first all-new story An Ordinary Woman (which Hytner directs) became an instant shocker as Sarah Lancashire's Jeremy Irons Gwen isn't one of those unreliable narrators, confiding to the camera because she's so appalled at her own incestuous feelings for her son - and as she gets bolder with her feelings, her readiness to confess them becomes her undoing. Although set in the present day there's a bit of an anachronistic feel, sometimes deliberate - Gwen hasn't quite got her head around lady vicars yet - sometimes perhaps less so - Gwen referring to her husband as "dad" is pretty old-fashioned, while the idea of a teenage girl called Maureen in the year of our lord two thousand and twenty counted as light comic relief as far as I was concerned. There is a touch of the comically absurd - Gwen's inappropriate feelings start when she discovers 15-year-old Michael's cock has grown to porn star proportions since she last saw it - but overall this is an incredibly uncomfortable watch, and a brave, powerful performance from Lancashire. (Not having watched Eastenders in decades I don't recognise the sets so couldn't join in with the other thing that got the internet in a tizzy: The former barmaid of the Rover's Return appearing in the Queen Vic.) 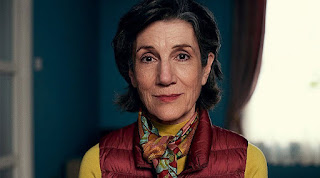 Marianne Elliott directs Soldiering On; originally played by Stephanie Cole, Muriel gets a bit of a spikier take from Harriet Walter in the second of these monologues to open with a funeral. But where Irene was attending the cremation of a virtual stranger to fill her time and find fault with the arrangements, Muriel has just buried her beloved husband, but is putting up a brave front. Soldiering On has many of the usual Talking Heads themes but not so much encapsulated in Muriel herself: The first two narrators have acknowledged mental health problems, while here it's her daughter who gets sectioned at one point. And while many narrators keep up a façade of respectability hiding something darker, here she's the one it's been hidden from. She tries to continue fooling herself that everything's fine as her son's (and possibly her late husband's) financial dealings start to look deeply suspicious, but can't deny it as her comfortable existence is taken away from her. I don't think this has ever been one of the absolute classic monologues of the series, but it does make a strong case for these remakes, as Walter brings a much more brittle, defeated edge to the character than Cole did - where Cole's Muriel seemed to be teaching herself to find pleasure in the simpler things like Neighbours and a walkman, Walter's version of her is fooling nobody, let alone herself, that the combination of betrayal and the loss of her creature comforts hasn't come close to breaking her. Still, there's an element of hope in her daughter's mental improvement, continuing the theme of Bennett using a cosy setup and luring you in with gentle humour and drama to make a wider political point about the kind of support networks that can bring someone seemingly lost back into society.

Talking Heads by Alan Bennett is available until June 2021 on BBC iPlayer.