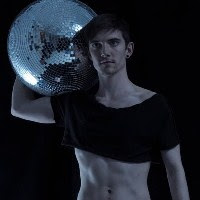 Cruising, Clubbing, Fucking at Soho Theatre is meant to coincide with the World Pride Day celebrations; although of course if it had been an official part of this year's Pride, it would most probably have been cancelled, like most of the rest of the events. Instead its brief run at Soho Theatre Upstairs (with a short tour to follow) has gone ahead, ending today. As with Torch Song Trilogy, this is another show that looks at a specifically pre-AIDS gay lifestyle in New York, although unlike that show this was only conceived and created this year, so as the subtitle - an elegy - suggests, it's a mournful look back at a hedonistic world that no longer exists. Specifically from the point of view of someone too young to have experienced it himself: Co-deviser and choreographer Joseph Mercier wishes he could have been around in 1978 New York to experience it, and instead has conducted interviews with men who were there. These, along with the writing of people like Derek Jarman, form the basis of his dance piece, which Mercier performs with his co-deviser Sebastian Langueneur. 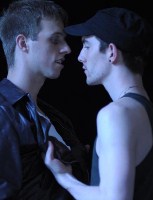 The piece takes the form of a fantasy in which Mercier visits the modern-day East Village, and imagines himself there in its '70s heyday, visiting in turn famous, long-gone clubs like The Anvil and The Mineshaft, the nude sunbathing on the piers, and the Adonis porn cinema. At each of these he encounters some good-looking young man, played by the improbably pretty Langueneur, some of whom spurn his advances, others welcoming them, having sex with him in backrooms, through glory holes, or taking him back home. Mercier's spoken introductions to these scenes are the weakest part as he's an awkward presence, very obviously a dancer not an actor. Sadly the dancing's a bit dull as well - it doesn't help that putting a dance show in a room with a low ceiling inches above the dancers' heads limits the possibilities for lifts and jumps. But even so, to my admittedly untrained eye, there was little interesting about the movement.

And apart from Langueneur's very existence, the show's not particularly sexy, even with both dancers having a sustained
FULL-FRONTAL MALE NUDITY ALERT
scene (plus a rather grim, explicit 1970s porn film gets projected during the scene of them visiting a dirty cinema.) And his reading and interviewing don't seem to have given Mercier that much of an insight after all; by the end he laments that today gay aspirations are more suburban and old-fashioned, and campery isn't as evident on every corner of Christopher Street. The appeal of a time of seemingly unending sex seems to have blinded him to the aggression inherent in camp, the in-your-face behaviour that can be a defense against fear and persecution.

The show's best moment is a radio advert for a men-only gym that's played over one scene, a none-too-subtle tagline inviting listeners to "work on your body... or get to know someone else's!" Shame the rest of the show doesn't have that sense of mischief.

Cruising, Clubbing, Fucking: an elegy by Joseph Mercier and Sebastian Langueneur ends today at Soho Theatre Upstairs; then continuing on tour to Newcastle and Belfast.