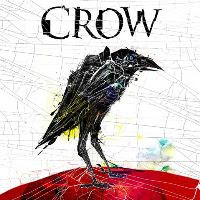 Crow at Greenwich Borough Hall has no connection to the ill-fated 1994 dark superhero movie. A shame, as the cast getting shot mid-scene could only have constituted an improvement. Instead we get an adaptation of Ted Hughes' sinister trickster Crow poems, although in fact very little of Hughes' actual poetry makes it into the show, usually spoken into microphones, over action that at best tangentially relates to the words. The big draw has been the involvement of puppet company Handspring, although despite the publicity heavily quoting the positive reviews for War Horse, this is actually Handspring UK, a new spin-off company from the one that created Joey et al. And in any event, it turns out that however cleverly designed they are, small black puppets up against a black background, dimly lit, are not the feast for the eyes you might imagine.

The set, which the programme accuses Holly Waddington of designing, is of a giant cowpat from which parts of the crow puppets emerge, and over which the six performers sometimes roll around - although a lot of the action is in dance scenes, which Ben Duke is held accountable for choreographing. This dance largely consists of the performers lumbering heavily around the central cowpat, doing that mime where you pretend to be stirring a big pot, and occasionally pawing at each other. Sometimes they pull apart or rebuild the puppets. There's a twisted variation on the story of the Garden of Eden. At one point I think god gave Eve a dental checkup, then looked up her skirt. Later a man-shaped crow puppet with a large worm for a cock wanders around for a bit then rapes a woman. I think he might have farted at one point as well, or that could have been the Apocalypse, these things are hard to pin down. Disjointed electronic music, blamed on Leafcutter John, punctuates everything. At least I really like the poster image; although the shattered nature of the image is a bit too apt for a show where the music, words, puppetry, projections and interpretative dance stylings are all out for themselves and make little attempt to relate to each other. Still, lead male dancer Dom Czapski's pretty cute, or at least it seemed like he might be from the brief moments when the lights were on bright enough to make out such things as facial features.

Crow by Ted Hughes, adapted by Mervyn Millar, is booking until the 7th of July at the Borough Hall, Greenwich.