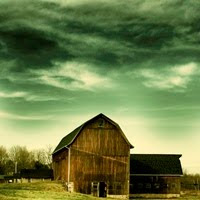 In 1972, a Canadian theatre company sent its actors out to various Ontario farms, to spend the summer working there and observing life in order to create a devised play. The resulting piece was considered a seminal part of Canadian theatre-making, but Michael Healey's gentle but compelling 1999 play The Drawer Boy imagines how that summer's research might have affected both the actors, and the farmers whose lives it put under the spotlight. Miles (Simon Lee Phillips,) a young actor, is taken in at a farm occupied by two elderly men, once childhood friends who went on to fight in World War II together. Angus (John Bett) received an injury that left him with a metal plate in his head, migraines and a memory that can hold on to almost nothing except numbers. Morgan (Neil McCaul) tends to the farm, looks after his friend, and nightly tells him a fairytale version of their lives, Angus' war injury and the English girls they loved and lost.

Eleanor Rhode's production draws us straight in to the sweet, painful friendship of the two men, Bett's hugely sympathetic Angus repeatedly having to fearfully encounter the "stranger" in his kitchen, then switch to a heartbreakingly trusting "hello!" when Miles introduces himself yet again. But no less engaging are McCaul as the more gruff, suspicious Morgan, and Phillips as the rather dim actor/writer. The playwright pokes a lot of fun at his own profession, Morgan taking much pleasure in making up ridiculous tasks for Miles to do - although the latter's naïveté does stretch credulity at times. 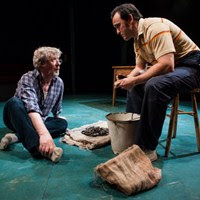 In the second act Healey shakes things up a bit, an outsider's view of his life story having a surprising effect on Angus, whose memory starts to trickle back - along with the things that Morgan left out or changed from the "Drawer Boy" fairytale he told him. The play's a slow burn that had me totally caught up in its characters, by turns funny (Miles telling Angus about his "too Canadian" take on Hamlet is great,) moving and intriguing. In the end Healey doesn't go for quite as big a plot twist as we might have been expecting, but in their own way the revelations leave the characters in a very different place, and Rhode's well-judged production is definitely worth visiting.

The Drawer Boy by Michael Healey is booking until the 14th of July at the Finborough Theatre.