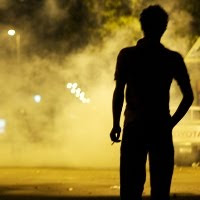 The second in Christopher Haydon's debut trio of plays about revolution and revolutionaries, and his first as director since taking over at the Gate, takes us to the "Friday of Rage," the 28th of January 2011, early in the eighteen days of Egyptian uprising against President Mubarak. Hassan Abdulrazzak's The Prophet is partly assembled from interviews with a number of Egyptians who took part in the marches, but instead of presenting them as a verbatim piece, the author wraps them up in the story of an apparently ordinary middle-class couple. Layla (Sasha Behar) is an engineer for Vodafone, which puts her on the wrong side of her own principles when the government demand the mobile network be cut off to stop the protesters communicating with each other. Hisham (Nitzan Sharron) is a former journalist who's written one well-received novel. His follow-up book, about a prophet figure in modern-day Egypt, is stalled by writer's block.

What Abdulrazzak does very well is bring out the way everyday life intrudes into the most historic events, even for people right in the middle of them. So Hisham worries about whether Layla is having an affair with her boss (Silas Carson,) and she in turn wonders if Hisham has eyes for the half-British literary agent Suzanne (Melanie Jessop,) who's taken an interest in his work. When she actually finds herself in the thick of the marches herself, in between getting tear gassed and shot at Layla wonders if shaving off her pubic hair will bring the missing spark back to her marriage. Her monologues about the marches utilise Abdulrazzak's interview material in a way that brings us into the middle of the action.

The storyline with Suzanne, meanwhile, goes in an unexpected direction, and reveals more about the couple's past and their own history with dissenting voices under an oppressive regime. Witty, layered and at times brutal, Haydon's production is a great example of political theatre that avoids lecturing its audience, letting us see the flawed, human face behind the big events in the news.

The Prophet by Hassan Abdulrazzak is booking until the 21st of July at the Gate Theatre.