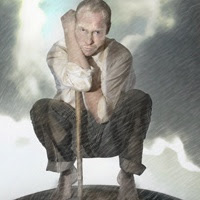 Distracted from his duties as Duke of Milan by his books of magic, Prospero was deposed in a coup by his brother Antonio and the King of Naples, Alonso. Washed up with his infant daughter on a remote island, he used his magic to rule it, enslaving its one human inhabitant and the various spirits, led by Ariel. 12 years later the royal families of Milan and Naples happen to sail by, and Prospero conjures The Tempest responsible for the next shipwreck in the RSC's "What country friends is this?" trilogy. Jon Bausor's set here becomes a much more expressionistic island of warped and broken floorboards, scattered with boulders and harshly lit by fluorescent lights. As with Twelfth Night, David Farr directs, and comes up with another uneven production that shines in the big setpieces, but struggles with the play's hefty exposition.

Jonathan Slinger's Prospero is neither the kindly old wizard we sometimes see nor the psychotic bully, but a rather creepy, bipolar figure who lurches from quiet moments to anger and violence. I may have just been projecting Willow from Buffy onto him when I saw him as maybe having been corrupted by the magic he uses; certainly as the play nears its end he seems to take stock of how much he's interfered with people's lives and imposed his personality on the island - to the point that Ariel (Sandy Grierson,) Caliban (Amer Hlehel) and all the island's spirits have been made to dress in copies of his suit. 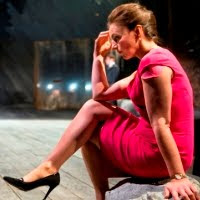 As with the last Tempest I saw, the dearth of female roles has been slightly eased by gender-swapping one of the conspirators; this time it's Alonso's treacherous brother Sebastian who becomes his sister, played by Kirsty Bushell. Sebastian's snarky back-and-forths with Antonio (Jonathan McGuinness) are one of the elements of the play that tend to feel like time-wasting for me but casting Bushell gives it an interesting new dynamic, the pair slightly channeling the Macbeths as they encourage each other to attempt murder.

The play's opening half hour is always a challenge, filled with Prospero's numerous Basil Exposition speeches catching us up on the extensive backstory, and Farr's production makes it a slog, as he doesn't do much visually interesting with them - a shame, as the clear perspex cube that forms Prospero's cell at the back of the stage would have made for a great way of showing the characters he's talking about, as many productions do. Obviously I'm not saying every version should be the same but I think these glimpses of the characters are always useful in The Tempest - not only do they liven up the endless exposition but these speeches introduce a number of characters, who we then have to put a face to later. But if the production stumbles over the trickier storytelling moments, it does pull out all the stops for the comic setpieces and big moments of spectacle: Trinculo (Felix Hayes) and Caliban's four-legged creature is funnily choreographed, the magical feast features a spectacular Ariel-as-harpy, and the masque is probably the best I've seen, with Ariel and the other spirits conducting Iris, Ceres and Juno like puppets. Plus all the wire-work gets done without the need to stop the action for five minutes while they clip on their safety harnesses. A flawed Tempest that flits between moments of inspiration and more workmanlike storytelling scenes.