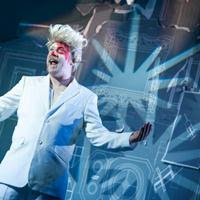 I can't call this a review as, for the first time this year, I couldn't handle the prospect of sitting through the whole of Utopia at Soho Theatre, so Andy and I left at the interval. Directors Steve Marmion and Max Roberts promised an ambitious project that invited a variety of writers, comedians, musicians and politicians to eschew art's tendency to look on the dark side. Instead they were to think positive and contribute their own visions of Utopia. None of this is actually apparent on stage: Instead six performers who deserve better (Tobi Bakare, Laura Elphinstone, Rufus Hound, Pamela Miles, Sophia Myles, David Whitaker) struggle through a substandard student revue, in which a number of sketches are split up and presented in installments over a long, boring, unfunny first hour. I struggled to see what most of them had to do with the subject matter; the rest tackled Utopia from a uniformly bleak perspective of how unattainable it, or anything close to it, is.

The second half held the dubious promise of Adolf Hitler's views of a perfect world. Perhaps Simon Stephens, whose contribution was also due after the interval, could have pulled it all together. Unfortunately Andy and I couldn't face another hour of feeling terribly sorry for the floundering actors, on the off-chance of finding out. As each protracted sketch finally reaches its end, its blueprint for a perfect world proven a failure (positive! thinking!) the actors shred the blueprint. I find shredding quite satisfying as chores go, but never before have I wished I was actually doing some shredding rather than watching a show.

Running time: Advertised as 2 hours 20 minutes including interval (I can't confirm if this is accurate.)
Posted by nick730 at 21:53