PREVIEW DISCLAIMER: This review is of the final preview performance. 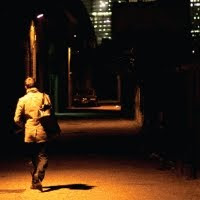 Madani Younis' opening season as Artistic Director of the Bush hasn't quite set the world alight, in my opinion at least, as we reach its final production. TV and filmmaker Dominic Savage writes and directs Fear, a short drama that pits two of the media's most hated figures of recent years, bankers and hoodies, against each other. Kieran (Aymen Hamdouchi) hangs around wealthy areas with his friend Jason (Jason Maza,) teaching him how to spot the richest businessmen to mug should they venture into the wrong back alley. Banker Gerald (Rupert Evans) has a couple of homes, an upcoming deal that'll make him a multi-millionaire, and a pregnant wife, Amanda (Louise Delamere.) The set, by takis, is gleaming white, and under the clear plastic floor you can just about see a row of gravestones - pointing the way to how the encounter will go when Gerald and Kieran finally meet.

And this is the problem with Fear, whose every development is pretty predictable. With Amanda wondering if their obscene wealth is morally acceptable, the play sets up the similarities between financier and violent mugger, both interested in money and unconcerned about who they'll hurt to get it. But there's little to believe or get drawn in by, and Kieran's unconvincing redemption arc is mired in cliché. Ed Clarke's filmic music, initially disquieting, is overused, as is the idea of Kieran identifying the audience as potential victims - at first amusingly done and making its point, it quickly gets very "yes, we get what you're saying, thanks."

Ian said he felt sorry for the actors, who give great performances in a lost cause; I was excited to see Clybourne Park's Lorna Brown in the cast, but as Kieran's mother she has disappointingly little to do. We did agree that if there's a "best supporting pair of trousers" award it should go to the tight, shiny pair that show off Rupert Evans' incredible bubble butt. But as we walked to the tube station afterwards, we had very little else to recommend about the show. Our discussion was overheard by a couple who'd also just seen it - the girl was a big fan of Savage's TV work, and wanted to check if it was just her imagination, or if what we'd just seen was, in her own words, "bobbins."

Fear by Dominic Savage is booking until the 14th of July at the Bush Theatre.