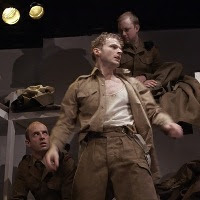 Set in the freezing West German winter of 1954, John McGrath's Events While Guarding the Bofors Gun, the latest long-unperformed classic to be revived by the Finborough, takes a very personal angle on the frustrations of the Cold War. The Bofors Gun has long since been obsolete but on a British Army base the official line is that it still needs to be guarded in case the Russians try to steal it. Six gunners, led by an 18-year-old Lance-Bombardier, have the pointless task (so clearly only for show that their guns aren't even loaded) tonight - to add insult to injury they've just been paid so the unnecessary duty keeps them from joining the rest of the regiment in celebrating. When Lance-Bombardier Evans allows the volatile Gunner O'Rourke to slip away and pick up his weekly tobacco allowance, things go badly wrong.

In Robert Hastie's production, McGrath's story takes on the scope of an intimate tragedy. Inevitably the explosive character of O'Rourke (the EnsembleTM's Charles Aitken) dominates the play, but the playwright allows the other soldiers their story as well. In fact the middle section of the plays sees O'Rourke gone from the stage for a lengthy period but if anything the tension of what he's getting up to during his absence makes for some of the most gripping scenes (Michael Bruce's music also helping ramp up the tension.) In many ways, the central figure is in fact the young Evans (Lee Armstrong impressing in what appears to be his professional stage debut) whose mismanagement of the situation stems from equal parts being out of his depth, and a rather cold determination to get on the path to becoming an officer.

Good though Aitken and Armstrong are, they don't overpower a strong ensemble, including Phil Cheadle as the stoical Flynn, and some good comic moments from Michael Shelford as the constantly bullied Rowe. Though Alex Warren's performance is also strong, I did remain a bit vague on the motivations of his character, O'Rourke's accomplice Featherstone. But for the most part this is an interesting and explosively acted look at what happens when a lot of wasted time gets mixed with an overdose of testosterone.

Events While Guarding the Bofors Gun by John McGrath is booking until the 16th of June at the Finborough Theatre.