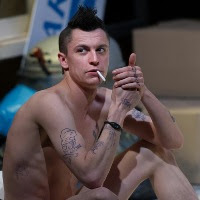 This week's theatregoing on POV is sponsored by testosterone: After Monday's posh boys, Tuesday's army boys and Wednesday's boys who sleep with boys, I end the week with two plays with "boy" in the title. Ella Hickson's Boys is set in an Edinburgh flat during a heatwave that unfortunately coincides with a binmen's strike. Mack (Samuel Edward Cook) and Benny (Danny Kirrane) are students who've just graduated. They share their flat with chef Timp (Tom Mothersdale) and violin prodigy Cam (Lorn Macdonald,) all living the stereotypical student lifestyle of drink, drugs and sex. With Mack and Benny having to confront life after university, a riot on the streets coincides with a riot among the friends.

Hickson's play takes a while to take shape, although Robert Icke's production boasts some excellent performances from the start from the four men, as well as Alison O'Donnell and Eve Ponsonby as Timp and Mack's girlfriends respectively. The revelation that a fifth flatmate, Benny's brother, committed suicide some months ago, feels like a bit of a standard trope but does at least get things moving towards a crescendo. Icke does a good job of building up simmering tensions in the first act; the second act is the stronger, although the story's climax comes way too early, meaning we're left with a case of multiple ending syndrome for the last half hour. There's a lot of beautifully written and acted, if a bit sentimental, scenes as the characters face their uncertain futures, but making me think Hickson hasn't learnt the lesson "kill your darlings" yet: However good a speech is, the play might be better without it.

There's a lot about the play that ends up being unsatisfying: There's some logical holes to a big event near the end; a lot of the symbolism (the rubbish bags piling up, the Disney metaphors with Timp as Peter Pan) gets heavy-handed; and the scene of riots both indoors and out had me comparing the play to Mercury Fur, a battle that it was never going to win. But if it doesn't quite work it is at times very entertaining, and very occasionally heartbreaking, with great performances all round. (Plus a biscuit to Hickson for addressing an issue nobody else in her generation seems to have cottoned on to, i.e. the fashion for getting covered in tattoos, and just what that's going to look like when you're older. I have a theory that my generation must have been the last one to see the previous batch of old men with faded and wrinkled tattoos, and people ten years younger than me don't have that association to put them off. Which means they get to be a cautionary tale for future generations, and the cycle will go round again.)

Boys by Ella Hickson is booking until the 16th of June at Soho Theatre.