Theatre review: If You Don't Let Us Dream, We Won't Let You Sleep 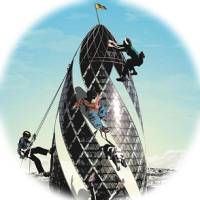 Anders Lustgarten is a full-time activist whose last play saw the BNP field an Asian candidate at the Finborough in time for the last election. Now that we know what actually happened in that election, he turns his attention to the politics of austerity. And the Royal Court Downstairs stage goes austere as well, with a production without décor for If You Don't Let Us Dream, We Won't Let You Sleep. The short play opens with a cabal of politicians, bankers and business leaders proposing the monetisation of society's downfall: Private companies will be responsible for crime prevention, and if the figures drop their bonds will pay out. But market forces have their own rules, and soon those who control the jails, hospitals and energy suppliers are betting short: The worse things get, the bigger their profits.

The metaphor is an obvious one and feels uncomfortably close to the reality, in another very angry play from Lustgarten. The first half is filled with examples of the most vulnerable paying the price of the national debt: After refusing to pay a "debt tax" (because she can't afford to) pensioner Joan (Susan Brown) has to have a meter fitted in her home, which beeps at her until she feeds it money. A nursery teacher (Meera Syal) has to tell a 3-year-old her parents have moved and left her behind because they can't afford her. Hospitals and prisons refuse to deal with incidents that will reflect badly on their statistics. And one banker's (Ben Dilloway) objections to profiting from rape see him get the sack. 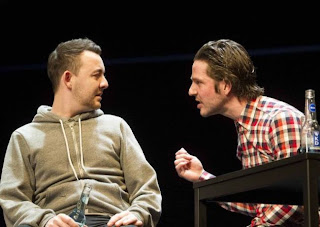 Probably best exemplifying the play's title (which comes from a slogan of the Occupy movement) is Ryan (Daniel Kendrick) whom we follow throughout the play as he goes from young man with dreams of university and improving his lot in life, via getting caught up in a robbery, to career criminal the system actually wants to re-offend. In the latter part of the play he tries to reclaim his life by joining a protest group alongside other characters we've met earlier, and they attempt to hold a show-trial for the very notion that the people are responsible for paying the government's debt. Here we get to the heart of Lustgarten's argument, although it also exposes the play's weakness as a piece of theatre - everything is buildup to us getting lectured (albeit entertainingly) on why we shouldn't accept the politics of austerity. 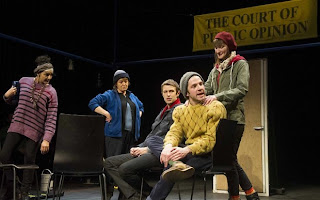 The vignettes of a worsening society that make up the first half also mean there's a lot that feels incomplete - the aforementioned storyline with the abandoned child and Syal's teacher is the most obvious example (Phill also said he'd have liked to see how the date between her colleague (Laura Elphinstone) and the appalling Jason would have panned out.) Director Simon Godwin manages to pull together the rather messy threads well enough, helped by the performers. Big Favourite Round These Parts Damien Molony has been showing off his range impressively on TV lately and he's doing the same here, as the spirited Irish protester (apparently this is the first role he's ever been able to use his own accent for) who uses his country as the example of a place that's lost its dreams to austerity and crumbled as a result; but also doubling as a scarily aggressive, racist thug who abuses Lucian Msamati's minimum-wage immigrant worker. 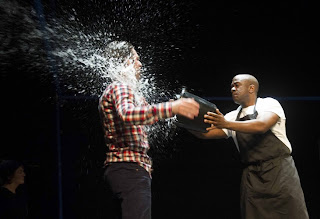 There's no subtlety to If You Don't Let Us Dream, We Won't Let You Sleep (Ferdy Roberts' sinister banker is named James Asset-Smith) and it suffers for it at times. But its rawness is also one of its strengths, and Godwin and his cast manage to harness this to strong effect, and find in Lustgarten's anger an optimistic belief that people do deserve more, and could even get it if they fight for it.

If You Don’t Let Us Dream, We Won’t Let You Sleep by Anders Lustgarten is booking until the 9th of March at the Royal Court's Jerwood Theatre Downstairs.