Theatre review: A Life of Galileo

PREVIEW DISCLAIMER: The RSC isn't inviting the Press to this until Tuesday. 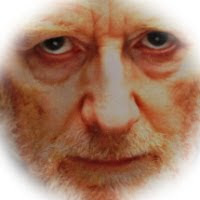 To round off the RSC's "A World Elsewhere" season, looking at what else was going on in the world during Shakespeare's lifetime, we have a 20th century classic that deals with one of Shakespeare's exact contemporaries, Brecht's A Life of Galileo. Always strapped for cash, Galileo Galilei passes off the Dutch invention, the telescope, as one of his own. He gets found out but not before the new tool gives him a new look at the heavens, and he realises he's found proof of Copernicus' theory that the Earth rotates around the Sun. The fact that the theory is considered heretical by the Catholic Church doesn't dim his enthusiasm or deter him from sharing his knowledge with the people. But the Church won't let mere evidence get in the way of centuries of teaching, and soon the Inquisition has taken an interest, demanding that Galileo betray his science and abjure his theory.

Brecht's play went through various revisions because, written during the Second World War, its celebration of scientific curiosity took on a different aspect in the wake of the atom bomb, making him reflect on the scientist's responsibility for how his work is used. Mark Ravenhill's new translation keeps coming back to apples: They're what Galileo uses to demonstrate how the Solar System works, but they're also a metaphor for the fruit of the tree of knowledge, and the fall from grace knowledge can sometimes bring. Also, you can eat them. 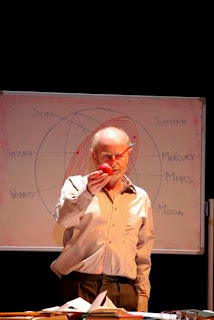 From the moment he arrives on stage and splashes about washing his feet (the front row may get wet) Ian McDiarmid's Galileo embodies the geeky joy of the scientist as lights go off in his head and he sees discoveries lie just around the corner. He's an utter joy in a crumpled suit, steamrollering over everyone's warning and objections until, too late, he sees that his own enthusiasm has trapped him. But even at the end as he's broken and imprisoned, the glint of mischief that saw him claim someone else's invention as his own so he could pay the milkman, remains in his half-blind eyes.

Roxana Silbert's production takes its cue from McDiarmid's energy and presents a carnival (at one point literally) of inventiveness. 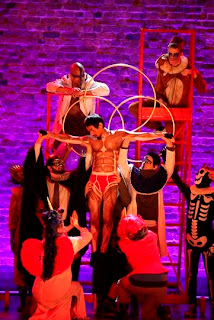 Actors appear in a burst of dry ice to play planets as the theory forms in Galileo's head. Chris Lew Kum Hoi as Cosimo de Medici, who we first meet as a spoilt child, whizzes around the stage on a micro-scooter with light-up wheels, the new view of the stars through the telescope another toy he can't wait to play with. Nuns sing the scene descriptions into oversized microphones. Tom Scutt's modern-dress design centres on blue graphs that hide red steps on wheels, ready to create one of these bursts of energy that seem to accompany the synapses sparking as a new conclusion becomes apparent.

But long before Galileo himself has to face the consequences, we see his enthusiasm has victims: Mainly his daughter Virginia, whom he has little time for, and whose long-postponed marriage to her father's well-off student Ludovico (Jake Fairbrother) is finally cancelled entirely when Galileo openly antagonises the Church. It's a strong performance from Jodie McNee who makes Virginia pious and therefore likely to buy into the Church's most outrageous teachings, but not the idiot her father believes her to be. 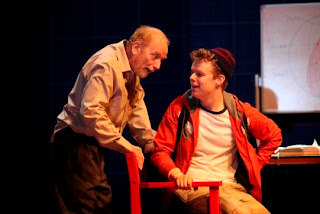 But the play's emotional through-line comes from Galileo's relationship with Andrea (Matthew Aubrey,) the young son of his housekeeper, later his most loyal student and therefore the most personally betrayed by Galileo's U-turn, and finally someone with a crucial role to play in spreading the new cosmology, in a climactic scene that's done with a nice touch of humour.

Gethin Anthony doesn't have too much to do in this one unfortunately, mainly popping up as the occasional grumpy cardinal. But he does wear shorts in the carnival scene, so that's a thing. 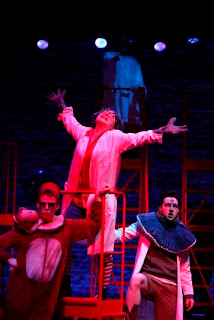 Obviously A Life of Galileo has been scheduled for months, so any particular topicality is accidental, but in the week of the Equal Marriage vote it's ironic to see a play where a religious establishment fights tooth and claw against something they perceive as encroaching on their power, however much evidence there is that things have changed. Ravenhill's script has some beautifully poetic passages that bring to life the paradoxical joy of discovering how small a part of the universe we are, and Silbert's production dispels the myth that Brecht wasn't interested in emotion, only in making the audience think: A Life of Galileo makes the emotions soar then brings them crashing back down as the consequences kick in. And that's what makes an audience think.

A Life of Galileo by Bertolt Brecht in a version by Mark Ravenhill is booking in repertory until the 30th of March at the Swan Theatre, Stratford-upon-Avon.