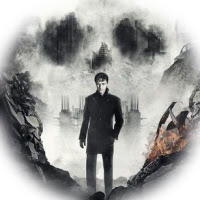 A slew of big-name productions are on their way to the West End this spring, starting with James McAvoy as Macbeth. Following the example of Michael Grandage, director Jamie Lloyd has launched his own production company with a residency at a London theatre. They're calling the season Trafalgar Transformed as designer Soutra Gilmour has turned Trafalgar Studio 1 into a traverse, with the first few rows of seating moved onto the stage, which has been raised a few feet. From my usual perspective of the (comparatively) cheap seats at the back this reconfiguration is a success - the stadium seating means sightlines have always been good, but coupled with the small stage make the view from the gods feel very disconnected. Bringing the stage a bit closer and surrounding it with audience gives a bit more of a sense of intimacy to a sometimes soulless space.

In Lloyd's take on Macbeth, a post-apocalyptic, near-future Scotland is a place of brutal, near-constant battles. Fighting off foreign forces, King Duncan's (Hugh Ross) army finds a hero in the great warrior Macbeth. But a trio of masked figures prophesy that Macbeth will one day be king himself, and spurred on by a grief-crazed wife (Claire Foy) he murders Duncan and is installed as his particularly despotic successor. 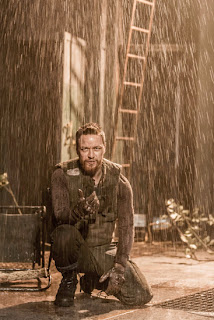 The euphemism "The Scottish Play" has never been more apt, as Lloyd has surrounded his Scottish star with a mostly Scottish cast, or at the very least doing the accent, which is, to me at least, a good match to Shakespeare's language, the text coming across clearly and sounding natural.

McAvoy is fascinating in the lead role, always watchable, and for the most part managing the tricky task set for him by this particular staging - of conveying a particularly brutal man in what is a brutal world anyway, and of giving him an escalating progression of paranoia and sadism as the story progresses. McAvoy's isn't an out-and-out villain of a Macbeth; Lloyd's production draws particular attention to the fact that he and his wife have had, and lost, a child, and this loss seems to have left Lady Macbeth in particular unhinged from the start. Following his crimes, Macbeth himself starts to noticeably crack up. Macbeth being the Shakespeare text I'm most closely familiar with, I was also interested in McAvoy's line readings, which found a different rhythm and meaning to some of the lines than I usually see - this is on top of Lloyd having made a few textual edits, reshuffling or reallocating the odd line. 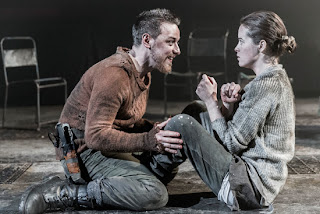 McAvoy's highly physical, energetic performance sets the tone for the rest of the cast in this bone-crunching production, but this is undoubtedly a show built around its star; even Jamie Ballard's Macduff and Forbes Masson's Banquo struggle to really make their presence felt. And after waiting nearly three years to see Big Favourite Round These Parts Kevin Guthrie on stage again, it's a bit disappointing that his Lennox has been lumbered with an orangey blond dye job that clashes with his dark beard. Foy is best in her scenes with McAvoy; I'm not sure the audience in the stage seats would have got much out of her performance, as the cast have mixed success in playing to the traverse, and Foy didn't seem to be aware of the onstage audience at all. 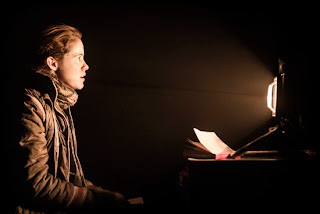 Jamie Lloyd's trademark frenetic pace seemed to have deserted him in his productions last year but in the first half of Macbeth at least it's back with a vengeance, the first 90 minutes racing past with me never looking at my watch once. After the interval there's a slowing down for a while, with mixed results: A significant change is having Macbeth himself murder Macduff's family, and it's a useful one in showing him having become worse even than the hardened warriors who surround him. This is also a scene that's rather successfully played at a leisurely pace, giving it the genuinely tense edge of a thriller. But the ensuing scene of Macduff and Malcolm (Mark Quartley) in England more often than not kills a production stone dead, and it's the same here, especially as it's played particularly ponderously; and Malcolm's dancing around his true intentions doesn't make much sense anyway in a production where axes and machetes do most of the talking. 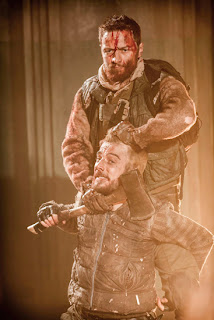 The production does find its feet again in time for the bloody conclusion, complete with literal shower of blood. Despite the high concept, this doesn't end up being a particularly revelatory Macbeth, although certain moments have a great inventiveness - Macbeth's second encounter with the witches for instance, where he drinks the potion in the cauldron and is "possessed" by the prophetic spirits. It's a strong and clear telling of the story though, and (almost) consistently entertaining.

Macbeth by William Shakespeare is booking until the 27th of April at Trafalgar Studio 1.