Southwark Playhouse, who like to find something a bit different for their Christmas family show than the usual panto fare, are this year attempting to put manga on stage. Stan Sakai's Usagi Yojimbo has been a hit comic for thirty years, following the adventures of the titular samurai rabbit. Stewart Melton's adaptation takes its story from the earlier books in the series, so we first meet Myamoto Usagi (Jonathan Raggett) playing at swordfighting with his friends. But as he can't stay away from his late father's swords, his mother (Amy Ip) decides it's time for him to begin training for real. He and his best friend set out on a journey over the mountains, but while Kenichi (Siu Hun Li) goes on to the nearest school as planned, when Usagi meets the elderly samurai lion Katsuichi (Dai Tabuchi) he thinks he's found his sensei, and begs to be accepted as his student.

As anyone who's seen The Karate Kid will know, Katsuichi's training techniques will involve getting quite a lot of chores done, but at the end of his unconventional training Usagi will come out of it a powerful warrior. 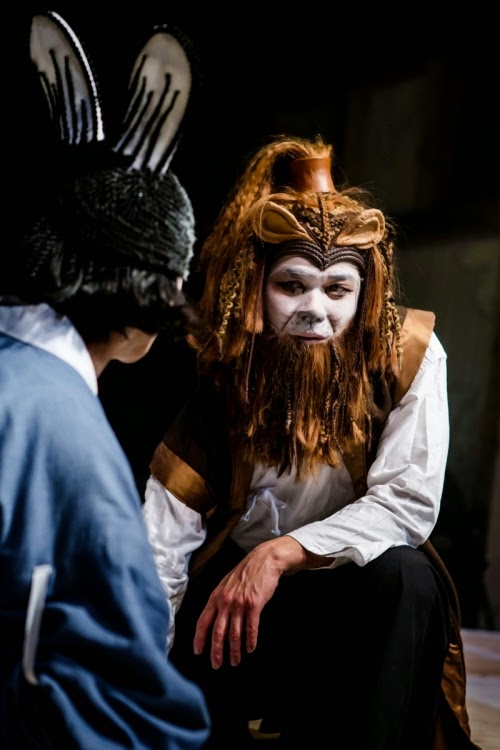 With well-choreographed (by Ronin Traynor) fight scenes from actors in animal makeup, an appealingly earnest lead from Raggett (who also seems somehow capable of jumping in the air in slo-mo in those fights,) and plenty of humour, this is an utterly charming show. Amy Draper's production attempts to get some of the feel of the comic-book origins with Nina Dunn's projections throwing sketches onto the stage and back wall, offering atmosphere or obstacles for Usagi to get over. 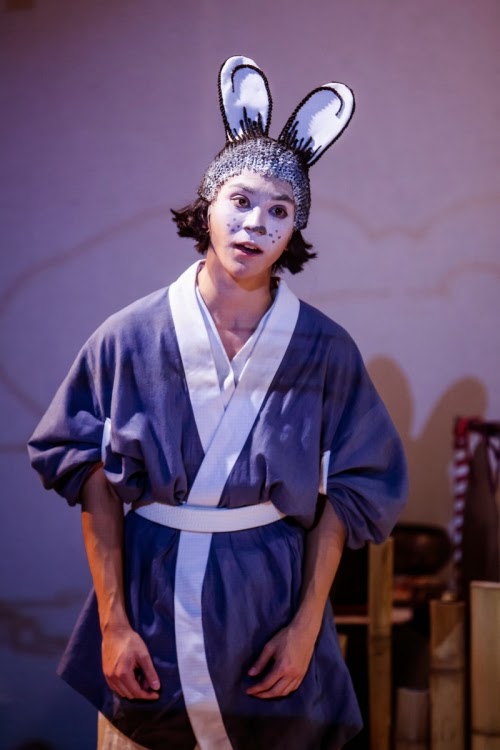 But it's not overdone, Draper otherwise choosing a very overtly theatrical way of telling the story, with the ensemble members sometimes changing their animal ears in front of the audience to signify a change of character - I do like when shows aimed at kids make an effort to get them interested in those things only live theatre can provide. As tonight was press night, actual kids were in pretty short supply, but those I saw looked utterly enthralled. Usagi Yojimbo plays on the traditional structure of Samurai stories and the films which in turn inspired Westerns, so how it plays out (ending with scaring the bandits away from the village) is a familiar enough story, but beautifully presented, and no doubt for younger viewers a new and gripping one. (Although if the audience is more child-heavy, I imagine the relatively long run time without an interval might see a lot of them escaping for a pee break.) 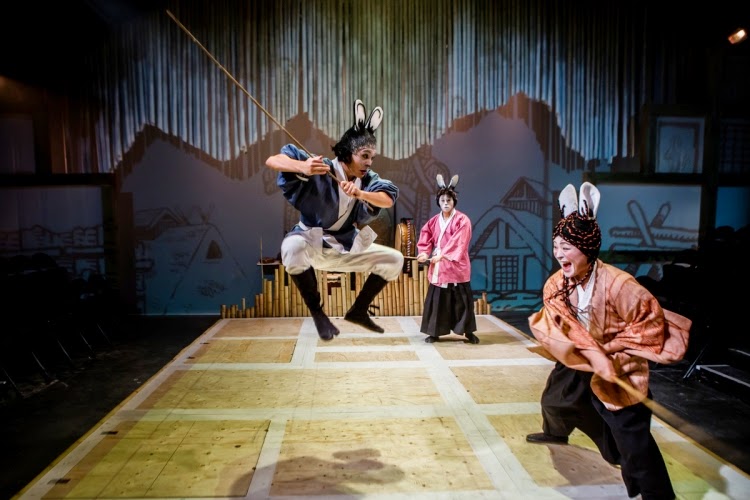 And if little boys watching get to want to be Usagi, little girls won't feel left out either, with Mariko (Haruka Kuroda) and even Usagi's mum getting the chance to kick some ass. And in a year when yellowface has been a topic of discussion again, kudos to Draper's production for making the effort to find an all-East Asian cast (when they could easily have argued that it doesn't matter since they're all playing animals anyway.) Joji Hirota's music, which he plays live on traditional drums, adds to the authentic Japanese feel; Usagi Yojimbo should create not just a new generation of theatre fans but Japanophiles as well.

Usagi Yojimbo by Stan Sakai, adapted by Stewart Melton, is booking until the 4th of January at Southwark Playhouse's Large Theatre.