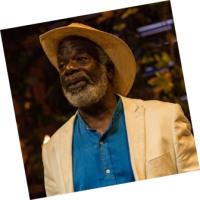 Before the Globe's winter season kicks off in earnest with the first Shakespeare productions to be designed especially for the Sam Wanamaker Playhouse*, there's something of a Homeric mini-season as a taster. We start with the return of Joseph Marcell in a piece he performed a couple of times last year, Derek Walcott's epic poem Omeros, which transposes some of the characters from the Iliad to the Caribbean setting of the poet's birthplace, St Lucia. So we have a fisherman called Achille, at odds with Hector, who drives a bus to and from the airport, over who owns a little rusted tin; and an elderly Philoctète who believes his rotten, stinking foot is a curse passed down from his slave ancestors, a throwback to the chains around their ankles. There's also, of course, a Hélène, pregnant and fought over by the local men even as they seem to despise her for her pride and vanity.

The other major characters, an ex-pat white English couple, aren't as easy to connect to characters from the Iliad, but they too have a story to tell even as they observe the island's life from an outsider's point of view. 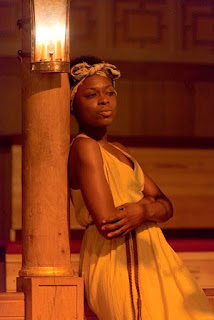 Bill Buckhurst adapts Walcott's poem and directs Marcell and Joan Iyiola as they variously narrate and play the characters. It seems redundant to call a show in the Swanamaker atmospheric, but it does seem to be particularly the case here as the actors conjure up a Caribbean island in the rainy season. Despite a cast of only two plus composer/musician Tayo Akinbode (making nicely understated contributions that do much to set the scene,) if anything the space felt even more intimate than usual. And there's something quite impressive about being able to conjure 20th Century St Lucia in a space as specifically Jacobean English as this one. 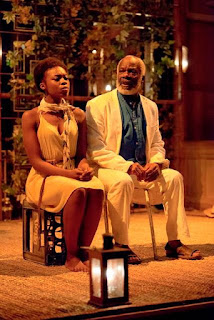 Though it does include some deaths, Walcott's story is far less bloodthirsty than the original, which suits the playfulness Marcell always brings to a role, a twinkle in the eye matched by Iyiola, whether she's playing a sultry Hélène or a quietly dying Maude. More of a verbal landscape painting of the island than a single narrative, this doesn't lack for charm.

Omeros by Derek Walcott, adapted by Bill Buckhurst, is booking in repertory until the 31st of October at the Sam Wanamaker Playhouse.

*a couple of the main house shows have done one-off public performances indoors to test the waters
Posted by nick730 at 22:22