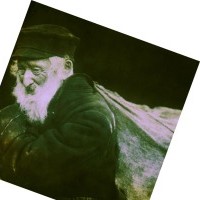 The latest "forgotten" play to be unearthed at the Finborough Theatre is thought to be a British premiere: Colin Chambers has written a new adaptation of David Pinski's 1906 Yiddish play Treasure. Part of a whole genre of Yiddish theatre that went on to inspire Fiddler on the Roof, the play is set in a Jewish town in a part of Russia that would nowadays be within the boundaries of Belarus. There Chone (James Pearse) has been the local gravedigger for the last 14 years, not a well-paid job but a steady one as the harsh conditions mean he's never short of customers. When his simpleton son Judke (Sid Sagar) buries his dog, he finds a stash of sovereigns which he gives as a gift to his sister Tille (Olivia Bernstone.) This puts Tille in an unusual position of power over Chone and his wife Jachne-Braine (Fiz Marcus,) who beg her for the gold coins; but she has plans to see what it's like to be rich, if only for one day.

The ensuing spending spree means the whole town is soon convinced that Chone and his family are millionaires. The local matchmaker (Sergio Covino,) who's previously ignored Tille's existence suddenly wants to find her a good husband, the president of the congregation (Alan Booty) wants to make sure the fortune is shared with the town, and the charities are fighting each other off for Chone's favour. 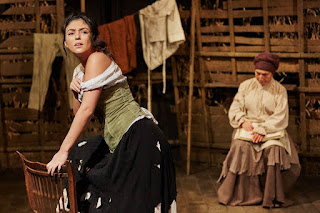 Once the truth comes out, the new obsession becomes to find if there was any more treasure in the dog's grave, but Judke has forgotten where it was. The townspeople end up digging the graveyard up half the night, while a major landowner (Richard Gibson - an unexpected religious conversion for Herr Flick of the Gestapo) wants to determine if it was found on his land so he can claim it all himself. From a modern perspective there's something very uncomfortable to watch about the money-lusting characters of Treasure; if the playwright wasn't Jewish himself you'd call blatant anti-Semitism on its portrayal of Jewish characters debasing themselves for cash, literally picking pockets if they can get away with it, and frequently wishing early death on family members rather than losing out on a penny. Pinski may clearly be playing affectionately with stereotypes about his own people, but I felt acutely aware that his work became popular in the early part of the 20th century, so he was inadvertently helping spread a caricature that would be horrifically abused. 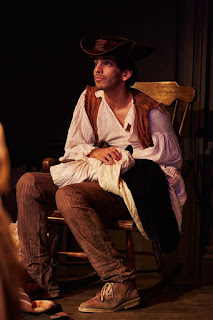 Bernstone is a lovely lead, though; Tille could have come across as shallow and wasteful of her opportunity, but she really makes you feel her frustration at the good-looking boys of the town (including David Palmstrom, Andrew Young and Michael Gilbert) being out of her reach because she doesn't have a dowry. By the end, her cleverness and strong personality may even have persuaded a couple of the men that she'd be worth marrying without it. 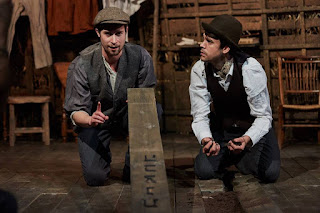 But otherwise Alice Malin's production never quite comes to life, the frantic running around for treasure doesn't really achieve the comic effect it's aiming for and there's lengthy dull patches. In fact one of the most powerful moments comes once the farce has been left behind, and the dead whose rest has been disturbed by the treasure hunt take to the stage to bemoan the living's obsession with fleeting wealth.

Treasure by David Pinski in a version by Colin Chambers, from a translation by Ludwig Lewisohn, is booking until the 14th of November at the Finborough Theatre.