Theatre review:
After Dark; or, a Drama of London Life 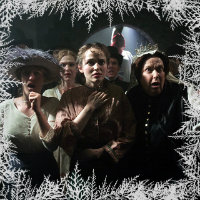 Whenever a radical new playwright comes along to change the kind of theatre people want to watch, the big names in vogue at the time tend to get swept away for a while, but get rediscovered and brought back into performance eventually. But while Oscar Wilde and Bernard Shaw are credited with that kind of revolution in Victorian theatre, their immediate predecessors have pretty much stayed in the obscurity they were cast into. I’ve always sort of assumed this was partly because the popularity of music hall at the time meant there weren’t many big names there to be swept away in the first place; and of what’s left, if even somewhere like the Finborough hasn’t seen fit to rediscover the hits of the time, there’s probably a pretty good reason. Well now the Finborough has rediscovered the big West End hit of 1868: Dion Boucicault’s comedies occasionally resurface but it was his melodramas that made him a household name, and my suspicions for why these plays remain obscure are proven right: From a 2019 perspective After Dark is very, very bad – in the best possible way.

Our fiendish villains are the cadaverously sinister lawyer Chandos Bellingham (Toby Wynn-Davies) and the godmother of Soho’s gin joints, gambling houses and music halls, Dicey Morris (Victoria Jeffrey.) They want to reunite fallen aristocrat George Medhurst (Jonathan Le Billon) with his fortune – not out of the goodness of their hearts of course, they plan to blackmail him out of half of it. 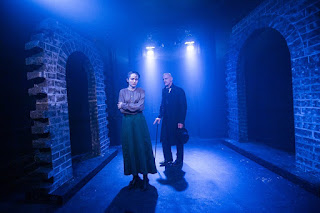 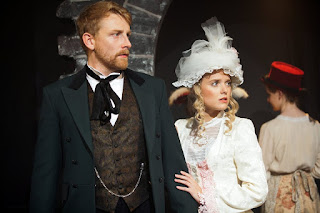 After Dark is subtitled A Drama of London Life, and much of its popularity in its day may have come from the way it keeps weaving the then-brand new London Underground into its story (in fact it’s the likely origin of a particular train-related plot twist that went on to become a very famous silent movie cliché.) I suppose there’s an argument to be made for trying to play it straight but personally I’m glad Phil Willmott’s production does nothing of the sort; from the double act of Wynn-Davies’ slithering lawyer and Jeffrey’s malapropising cockernee madam, to Fyans’ square-jawed, po-faced hero, this is camper than Butlins. 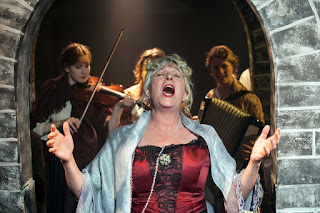 And the comic potential of trying to stage a great theatrical spectacle in a room above a pub is fully taken advantage of – on one level Hannah Postlethwaite’s set of two arches constantly reconfigured into different tunnels and alleyways is a genuinely ingenious way of achieving this, but on another the constant frantic wheeling around of the set, with actors as likely to trip over the scenery as characters are to trip over a long-lost parent in a ditch, adds another surreally silly touch. The aforementioned popularity of music hall means we get regular musical interludes from the trio of Gabi King, Rosa Lennox and Helen Potter – the best of these has to be when they attempt to “cheer up” Gordon in a bizarrely aggressive manner. But my favourite single sound gag may be when we hear a backstory involving a convict transported to Australia, and Julian Starr quietly incorporates a didgeridoo into the sound design. 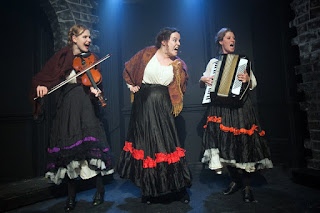 Watching Willmott’s production it’s hard to believe the play wasn’t always meant to be tongue-in-cheek to some extent, but then Boucicault does include an element of social commentary that seems perfectly earnest: Introducing a Salvation Army officer (Kate Stafford’s gloriously-named Aviona Crumpet) means we see the destitute left behind by Dicey Morris’ schemes, and there’s a running theme of the military having been left to rot once the war’s over – even with the silly approach, some of the genuine feeling in these scenes comes through. Besides, I wouldn’t be surprised if, just like his comedies have been liberally tweaked in recent productions to make them work in the 21st century, After Dark has, too, had some big and small changes to fit the less-than-100%-serious approach (but I really hope Gordon threatening to cry “manly tears” is a genuine line.) I hope nobody comes into this expecting to have their heart broken from all the earnest drama; if you’re looking for a load of camp old nonsense though you won’t be disappointed.

After Dark; or, A Drama of London Life by Dion Boucicault, based on Les Oiseaux de Proie by Eugène Grangé and Adolphe d’Ennery, is booking until the 6th of July at the Finborough Theatre.