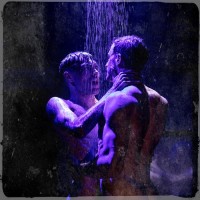 There’s nothing unusual about a gay-themed play heavily promoting itself on the fact that it features male nudity, although there’s a couple of promising signs that suggest Afterglow might be a bit different from the majority: Tom O’Brien’s production is being staged at Southwark Playhouse, one of the most successful and well-respected London fringe venues; it appears to have an actual budget; the actors are in fact real actors who have had previous professional acting experience as actors, possibly even being paid for it*; as well as being people you might actually want to see naked, and indeed being the same people as featured on the show’s poster. All these are radical departures from what we’re used to, and they successfully put Afterglow a cut above a lot of the theatre served to niche gay audiences, but how does it fare compared to fringe theatre more broadly?

Not badly but with a few issues, is the short answer. Josh (Sean Hart) and Alex (Danny Mahoney) are a mid-30s New York couple in an open marriage. Expecting a baby with a surrogate in a few months’ time, they’re having as much fun as they can before their lives get busy. 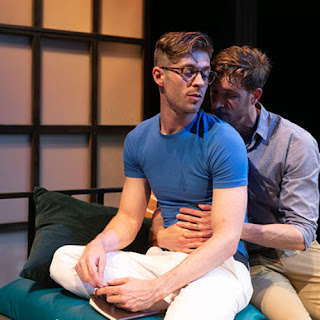 This includes a threesome with Jesse Fox’s 25-year-old Darius (Alex snarkily wonders if he might be one of those people who like to go by a more unusual middle name, which feels like a nicely self-deprecating dig by a playwright who goes by S. Asher Gelman.) From the amount of cleaning up the bedroom they have to do at the top of the play a jolly nice time was had by all, so Josh agrees to hook up with Darius again by himself the next day. This is totally within the couple’s rules and with Alex’s full knowledge, but what’s not allowed is building up more of an emotional connection that could threaten the couple’s status quo. Inevitably this is exactly what happens, and as Josh starts investing more in Darius both emotionally and financially, he starts to keep these developments from his husband. 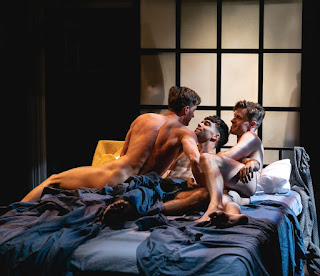 We often hear how much Josh likes surprises, so it’s ironic that he probably wouldn’t much like Afterglow: It does have a lot of strengths but its plotline isn’t one of them. Gelman aims to take a fresh and serious look at polyamory but everyone I went with agreed that every story beat was one we’d seen before in other stories about open relationships. It’s tricky because obviously the constraints of making a drama mean everything can’t just go swimmingly or nothing would happen, but even so I’d like to see the premise taken somewhere different – if there’s only one foregone conclusion in any open relationship story, why should people continue to tell them? I was also unnecessarily distracted by Josh’s job as a theatre director – he’s either as big a success as three Susan Stromans put together, or he’s a trustafarian with an outside income we’re not told about because it’s made abundantly clear he’s got a lot of money. And I know there’s many differences between London theatre and New York theatre, but I can’t imagine one of them is that it’s easy to get rich as a jobbing director there, because if it was we’d have none left over here. 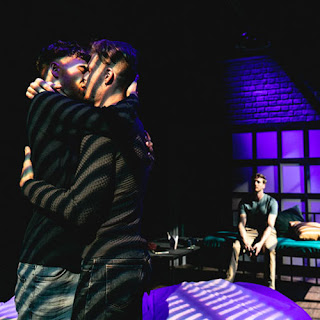 If plotting isn’t Gelman’s strong point dialogue and character definitely are, as the play keeps you involved in the story even if you can see where it’s going. Alex and Josh’s lifestyle might be a bit too good to be true but they both have a mix of loveable and deeply unlikeable characteristics that make them feel like real people – they’re a couple you’d quite like to know, but maybe not spend too much time with. Although, was Josh really planning to piss off the fire escape? I mean there’s being obnoxiously rich, there’s cheating on your ludicrously attractive husband, and then there’s some things that are unforgivable. But crucially Hart and Mahoney really do have a chemistry that makes you believe in their relationship – you feel they’re both utterly invested in staying together and neither of them can quite understand their own compulsion to threaten that. Everything from the two kissing to just resting their heads together has an intimacy that’s easily as sexy as the nude scenes. 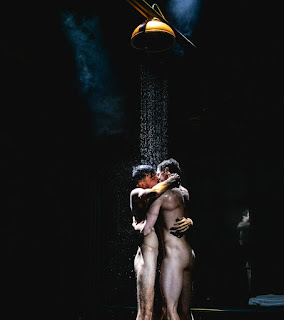 But of course there are multiple nude scenes, because this is the story of three people so committed to saving water they take a lot of showers together; and as someone who’ll shamelessly objectify actors even when not particularly invited to, I wasn’t going to let a show that markets itself heavily on the
FULL-FRONTAL MALE NUDITY ALERT!
from all three of its stars go without some comment. I mean, they’ve tried to pretend that’s not the whole marketing strategy; I read a promotional interview where Hart insisted it was about time everyone accepted it was NBD if they all get their cocks out because nearly half the population has one. Which is (a) a great way of making it a non-issue while also making sure everyone knows they definitely do get them out and (b) all very well for some people to say – I mean he won’t be taking anyone’s eye out in the front row but it’s still probably safe to say that half the population might have a cock, but a bit less than half the population has quite as much cock as Sean Hart does. In other news, the inevitable manscaping has taken place, but mercifully nobody’s gone full baldylocks, which would be frankly off-putting – they’re not Germans, dear. They’re also clearly not real Americans, I imagine the real-life odds of finding a full complement of foreskins on a white New York throuple are fairly low, but I for one am not complaining, it’s not like I believe in method acting anyway. 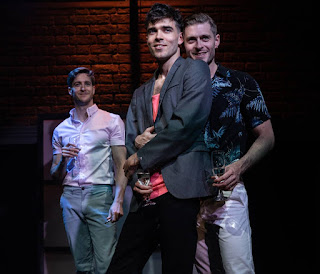 Back in something vaguely resembling a theatre review a sane person might write, Libby Todd’s set design nicely conveys the various locations – I particularly liked the way the aforementioned fire escape was put together – although the fact that the actors have to do all the scene changes themselves meant that some of them go on too long and sap the energy. There are also costumes, occasionally, with one particular shirt giving me a bit of a flashback to Titus Andronicus in terms of Hart’s ability to pull off a bold print (and don’t think I didn’t notice the French tuck.) O’Brien’s scene-change theme of suggesting a loud club did mean David Howe’s lighting did go a bit full-on with the flashing lights that irritate me (I’m not epileptic but if it’s humanly possible to become so I swear theatre lighting designers are on a collective mission to make it happen.) In all, Afterglow does suffer from a story that bears a few too many similarities to others that have come before, but everyone involved has enough talent to make it feel fresh regardless.

PS: Regular readers may both remember that in last year’s annual theatre roundup I bemoaned the fact that the insanely buff Danny Mahoney had to wear so many layers of clothing in White Fang. I was only suggesting he should get the pecs out and here he is six months later waving his willy around like nobody’s business, so basically what I’m saying is let me know if you’ve got any requests for 2020 and I’ll see what my powers can do.

Afterglow by S. Asher Gelman is booking until the 20th of July at Southwark Playhouse’s Large Theatre.