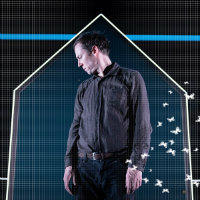 From the first Rupert Goold productions I saw I've associated the director with the ability to put the nightmarish on stage (in a good way,) and it's not a knack he's lost as his latest Almeida show plays out like a horror film, innocuous beginnings building to hair-raising tension. But there's no serial killers or supernatural elements to The Hunt, David Farr's adaptation of a Danish film by Thomas Vinterberg and Tobias Lindholm. Instead there's two very modern fears at play, the one of monsters in our midst and the other of being falsely accused of being one of those monsters. Of course my main current image of Denmark is of somewhere almost empty, apart from the odd person suddenly keeling over dead or running around yelling "Rasmuuuuuuuuuuus!" and, while the town where the play's set isn't quite that deserted, it's clearly been shrinking in recent years.

So much so that the local high school has closed and, rather than relocate with his job to the nearest city, beloved teacher Lucas (Tobias Menzies) has taken a job at the town's pre-school, where he's become an instant hit with the children. 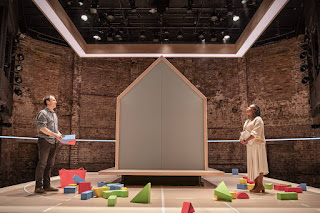 Particularly those, like the daughter of his oldest friends Theo (Justin Salinger) and Mikala (Poppy Miller,) who feel listened to by Lucas in a way they aren’t at home. When he thinks she's starting to think of him in an inappropriate way Lucas turns down a gift from her but Clara (Abbiegail Mills, Taya Tower or Florence White) is upset, and takes revenge by telling headmistress Hilde (Michele Austin) that her teacher abused her. The obvious way to play out this story would be as a mystery about whether anything actually happened, but The Hunt is very careful to make Lucas’ innocence clear – as well as showing all of the evening in question, we also see the details that added up in Clara’s mind to help her construct her story. And it’s a very simple story, but in one of the ways the play feels like a smaller-scale The Crucible, except interesting, more children suddenly start to make accusations, and the allegations get more convoluted and specific. The fact that the story that emerges is actually impossible, to the point that the police decide they have no case against him, doesn’t stop the town’s fury once the witch-hunt gets started. 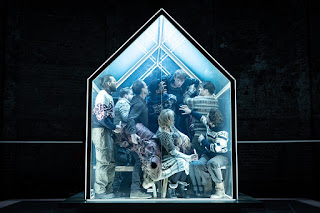 In a recent interview about the play Tobias Menzies said he knows he has a face that seems harsh when resting, which has made for a career full of a certain kind of role; in that sense Lucas is casting against type, as although most of the time he appears distant and his friends comment that they don’t really feel they know him, around children he opens up in a way that’s almost goofy. It’s a really great performance that anchors the play, as he becomes instantly sympathetic but can also play the stubborn, slightly cold incomprehension of the man when everyone turns against him. 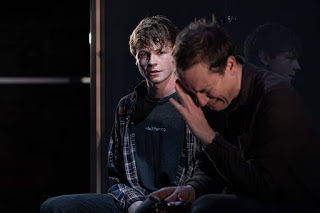 There’s also an unspoken but clear sense of danger from the start, as the town is by the woods and the men, at least, socialise largely at the hunting lodge and with weekend shooting trips. Lucas’ initial fear is that the rumours will affect his chances of getting back his son Marcus (Stuart Campbell,) whom his ex-wife is trying to keep away from him. When Marcus arrives unexpectedly on Christmas Eve, the scene is set for the show to properly turn into a thriller as the two (plus an AMAZING dog, I have no idea what breed it was and I don’t think I’ve ever seen one like it before but it was massive) start to feel under siege. Much of the tension comes from the memorable staging: The central feature on Es Devlin’s double revolve is a small cabin that calls to mind the hunting lodge, and while making it out of glass would seem counterintuitive to the feel of a wooden building in the forest it’s the masterstroke. It creates a space on stage for characters to be alienated from each other, as well as for the men of the town to squeeze into and sing drinking songs during scene changes, adding to the feel of a masculine mob that could turn at any moment. 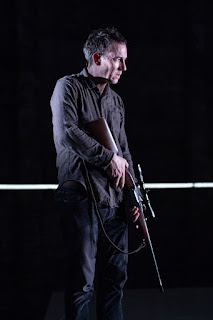 It also, through changes in Neil Austin’s lighting, goes from completely clear to opaque and back instantly, allowing new sets and surprises to be set up and suddenly revealed. I don’t think it’s ever actually used for anything so obvious as a jump-scare, but there’s the increasingly oppressive feeling that something disturbing could appear in there any moment. As well as the obvious reason you might keep looking at your watch during a show there’s also a positive one, in the sense that the tension becomes unbearable and makes you check how much time is left before the show ends and things come to a resolution one way or another; while The Hunt opens up interesting questions about mob mentality and the way we think about protecting children, where it’s most effective and memorable is in the way Goold uses it to really twist you into your seat with tension.

The Hunt by Thomas Vinterberg and Tobias Lindholm in a version by David Farr is booking until the 3rd of August at the Almeida Theatre.