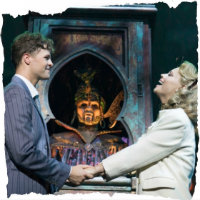 Where musicals in 2019 have been concerned, the smaller ones have been much more likely to strike a chord with me than the big ones so far. So how does that bode for a musical whose actual title is Big? Spoiler alert and everything, but not well. John Weidman (book,) David Shire (music) and Richard Maltby's (lyrics) musical is based on Gary Ross and Anne Spielberg's 1988 film that remains a well-loved classic and a milestone in Tom Hanks' career. This 1996 stage adaptation, on the other hand, was apparently such a financial disaster I'm surprised it's not better-known among the legendary Broadway trainwrecks like Carrie and Spider-Man: Turn Off The Dark. So it's not much of a shock if it's taken this long to make it to London; more of one, though, that nobody seems to have learnt their lesson, and instead of a quiet, soon-forgotten run on the fringe we get Morgan Young's flashy production in the absolute barn that is the Dominion.

The story sticks close to the film as shy twelve-year-old Josh (Jamie O'Connor, alternating with Harrison Dadswell and Felix Warren) wishes on a fairground fortune-telling machine to be bigger, and wakes up the next morning in the body of his adult self (Jay McGuinness.) 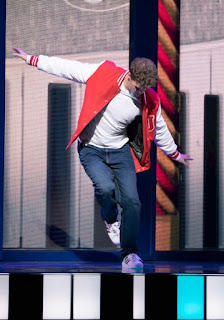 He flees with best friend Billy (Jobe Hart, alternating with Austen Phelan and Theo Wilkinson) to New York, a city famous for its complete lack of racial diversity[citation needed]. He needs a way of supporting himself, and fortunately for him this is a 1980s family movie view of what business is like, so a major toy company is struggling because it places all its product development in the hands of accountants with an inherent dislike of children. Also the fact that they apparently only produce one toy for Christmas every year but it’s mainly the other thing, so when owner MacMillan (Matthew Kelly) bumps into an adult with a child’s mind he immediately gives him a job. Josh also finds himself with a luxurious flat for some reason, and even a love interest – Kimberley Walsh plays marketing manager and accidental statutory rapist Susan. Susan hasn’t had much luck with men, and that is her personality. 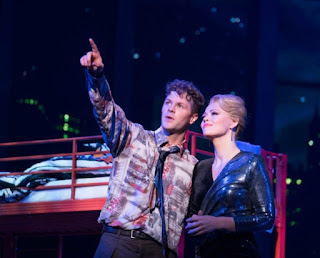 To be honest I didn’t leave the show particularly ill-disposed towards the cast or creatives – there’s no star-making turns here but everyone’s just about got the talent to carry off what’s required and makes up for the rest with obvious hard work and enthusiasm. It’s just hard to see why they’re bothering when the show itself is as unsalvageable as this: The trouble is Big is a musical and Shire and Maltby’s songs are uniformly dull, derivative, dated – and not just now, it often feels implausible that they come from a 1990s musical rather and an early 1960s one - and sometimes interminable. The importance of a musical’s book shouldn't be underestimated but even so if it’s by far the highlight, the moments of dialogue a brief respite where the characters come to life and you dread the next time they break into song, that should be a sign there’s something badly wrong. I usually find at least a song or two in any show that stands out but the best I can say is that “Dancing All The Time” and “I Want To Know,” Susan and Josh’s respective songs during the whoops!paedo scene, are downright bearable. Unfortunately not long after we get “Coffee Black” and “The Real Thing” in quick succession, both of which are under the impression that they’re such great songs that the audience would like to hear them go on FOREVAH AND EVAH and basically no, and no. 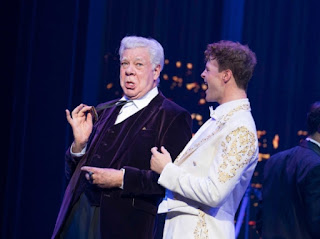 The story may stick closely to the original but of course the film had charm enough to cover up the cracks; instead, as well as the squick factor there’s the fact that the magic Zoltar machine is barely the least plausible part of the plot once you factor in the toy company whose numerous eccentricities and honking inefficiencies just happen to be exactly what the plot needs at any given time. The all-white adult casting of Young’s production only serves to reinforce the idea that they’ve been remarkably tone-deaf to the show’s values dissonance in other areas such as the gender politics (though Lori Haley Fox plays her with gusto, Josh’s shrill, uptight secretary is a character I’m pretty sure is directly lifted from 1961’s How to Succeed in Business Without Really Trying.) Also the toy company plot all builds to a competition to design the Christmas toy, and we find out Josh has likely cracked it and it’s something inspired by his wish, but then the show ends before the writers have to actually cough up and tell us what it is, which is the kind of thing to make you go all Annie Wilkes on their asses. Meanwhile Wendi Peters as Josh’s mother gets a couple of brief moments in the spotlight as she sings about how her son’s missing and she’s sad, but given for all she knows he’s dead in a ditch she could probably be sadder. 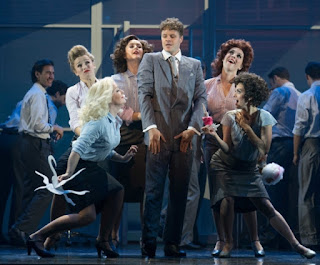 Jay Wanted and Kimberley Aloud can both carry a tune as long as it’s not too heavy – they basically cheerfully get on with things but you get a bit nervous when they try for a difficult note, and I did wince once but it’s OK, it was dark and I was about half a mile away so she won’t have seen it. Their chemistry is one of the best things about the show though, and their scenes together are charming, especially when they’re not singing some godawful song to each other. When he’s with Walsh is one of the times when McGuinness really starts to convince as a slightly otherworldly character trapped in the wrong body; given he’s best-known for being crowned Dancey McDanceface 2015, it’s no surprise if the other is when he’s dancing, as he throws his body around in an endearingly energetic, slightly awkward way. 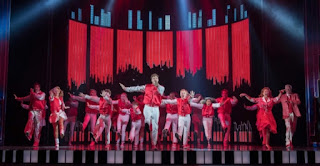 Speaking of McGuiness’ body, yes he does appear in just his pants when he first transforms and can no longer fit into his clothes, and no I can’t find any publicity photos of this, it’s like they don’t want people to see this show. I guess the makeup covering his tattoos would have been too obvious in photos, I mean I could just about see the difference in skin colour from the back of the Circle, but surely that sort of thing is what Photoshop is for, honestly do I have to think of everything? Then again I’m not sure the producers do want anyone to see the show, other than spending a vast amount of money on production and publicity there’s no evidence. And you can charge outrageous ticket prices to get the money back but that only works if people actually buy them, and apart from my “cheap” seat being in a different postcode I had a glorious view of the stage unimpeded by any pesky audience members in the dozen rows in front of me*. Unfortunately, despite the efforts of the cast, the feeling is that after the show tanked on Broadway it was eventually brought back to life without properly looking into why it tanked. It’s apparently been retooled in the intervening 23 years; clearly, nowhere near enough.

Big by John Weidman, David Shire and Richard Maltby, based on the film by Gary Ross and Anne Spielberg, is booking until the 2nd of November at the Dominion Theatre.

*also, I like a seat upgrade as much as the next person so it sounds like I'm just being arsey if I don't get one; but they’re for the theatre’s benefit as much as the audience’s as there’s a better atmosphere when everyone’s sat close together. And while I can’t speak for how full the Stalls were I can say that the wall of eerie silence whenever someone attempted a joke can’t be great for the cast’s morale or for word-of-mouth
Posted by nick730 at 23:26