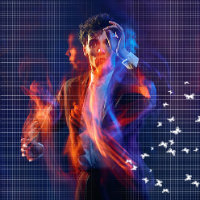 Prolific off-Broadway composer Dave Malloy hasn’t had much work seen in the UK that I’m aware of, but with his shows starting to move to Broadway and win Tonys London theatres seem to be catching up, with two works from his back catalogue opening this autumn. If the opening salvo is anything to go by we’re in for an… odd time, if not quite as irritating to me as some of his peers’ experimental work. Preludes takes its theme from the late 19th/early 20th century Russian pianist, conductor and composer Sergei Rachmaninoff, who became an overnight sensation with his Prelude aged 19, only to have a disastrous reception to his Symphony No. 1. There followed a three-year period of depression and writer’s block, which he only came out of with the help of extensive analysis and hypnotherapy from Nikolai Dahl (Rebecca Caine.) Malloy imagines this period of Rachmaninov’s life through the prism of the trances he was put into.

The composer is split into two on stage – Rachmaninoff (Tom Noyes) is wordless until the very end, playing the piano dressed in tails, the very image of the classical musician. But Rach (Keith Ramsay,) an emo kid doing Princess Diana eyes, is the version we actually get to hear from throughout the show. 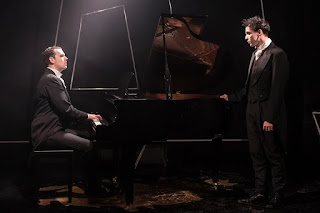 The best I can make out the reason for this dual Rachmaninoff is that Noyes is the stoic public face, continuing with his work as a high-profile concert pianist, while Ramsey is the inner turmoil at being unable to compose anything new of his own. Rach has support in the form of his first cousin/fiancée Natalya (Georgia Louise) and best friend, the opera singer Chaliapin (Norton James,) while Steven Serlin’s Master is a composite of various authority figures and potential mentors who prove disappointing in some way: Chekhov, Tchaikovsky, Tolstoy and even the Czar, whose personal dispensation Rach needs to marry the close blood relative he’s fucking. 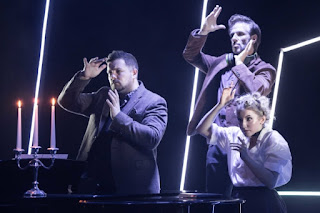 Malloy’s songs are a demented mix of the Russian composer’s own work – and some of those who inspired him – with electronica and ambient noise. Alex Sutton’s production matches it for oddness, with Rebecca Brower’s set and Christopher Nairne’s lighting creating a neon tunnel where comparatively realistic scenes meld into dreamlike moments. Most effective at this is the second act opener “Loop” (which, yes, goes round and round in circles,) in which Chaliapin stars in an opera while dressed as the devil, with Rach frenetically conducting. It’s a weird kind of nightmare that provides the most memorable visuals in a show generally strong on them, although inevitably the flashing lights ended up being too much for me to look at after a while so I will no doubt have missed some of the more striking moments. 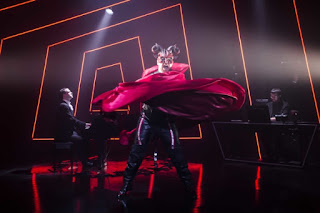 The oddness of Preludes provides both its strengths and its weaknesses; its location seems to constantly shift between the turn-of-the-last-century Moscow of the real events, and the present-day New York of the show’s composition. I had to use the example of Spring Awakening to mentally reconcile this, but unlike that show the distinctions here aren’t very clearly drawn. I think the anachronisms are meant to signal part of the journey under hypnosis but whether it’s Malloy’s show itself or Sutton’s production, it’s not always clear where reality ends and hypnosis begins (for a show that takes it as its high concept, very little of it actually seems to take place in a trance world.) 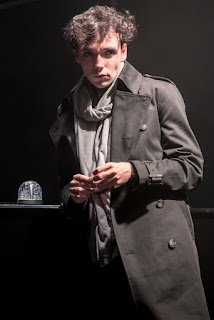 On the other hand Malloy’s particular brand of musical oddity more or less worked for me; I can’t see me walking around with the tunes on my iPod but the Rachmaninoff-via-Delia Derbyshire style comes off weird and wonderful more often than it does weird and wearying. As someone who doesn’t have a great ear for music I find a lot of the more experimental modern American composers hard work – their work tends to be praised for a complexity and ambition that’s lost on me and all I’m left with is songs it’s hard to find a tune in. With a little help from Rachmaninov Malloy does offer a tune most of the time, and while I didn’t love Preludes - the second act is about ten minutes too long and drags – it left me, if not impatient for the next of his shows on the horizon, definitely intrigued rather than dreading it.

Preludes by Dave Malloy is booking until the 12th of October at Southwark Playhouse’s Large Theatre.