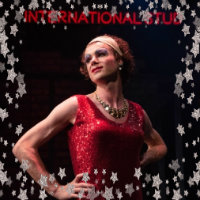 Have you ever felt like a theatre's gaslighting you? It's how I felt when the new Turbine Theatre announced its launch show as Harvey Fierstein's iconic 1970s gay play Torch Song, and none of the articles leading up to the production seemed to acknowledge that it's much better known as Torch Song Trilogy. It turns out that no I'm not going mad, yes that is the title of the 1970s play cycle, and yes there is a distinction: This is in fact the 2017 version of the script that Fierstein made significant cuts to, the slight title change differentiating between the two texts. Not that Drew McOnie's production departs from the original structure, even announcing the original plays' titles in neon signs over Ryan Dawson Laight's set. It's a story whose cast grows as it goes on, so opening act "International Stud" lights up just on drag queen Arnold (Matthew Needham) as he gets changed after a show, confessing to the audience how much he longs for a man he truly belongs with in the hedonistic underworld of gay '70s Manhattan.

He's soon joined by a candidate for that role, but while Ed (Dino Fetscher) will end up being part of his life for a long time to come, it won't be a straightforward relationship and will come with a lot of heartbreak along the way. 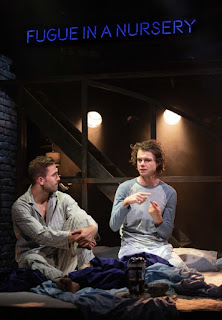 Ed had admitted from the start that he's bisexual, but Arnold's still unprepared for him to leave him for a woman. By "Fugue in a Nursery" Ed is married to Laurel (Daisy Boulton,) who's so open-minded about her husband's past she's invited Arnold and his new boyfriend Alan (Rish Shah) to spend the weekend. "Widows and Children First" remains longer than the first two acts put together, as it sees Arnold confront his visiting mother (Bernice Stegers,) who doesn't know he's now fostering gay teenager David (Jay Lycurgo.) Although the first two acts are good, with a mix of funny and moving moments, this is where the heart of the play lies, as Arnold tries to get his mother to understand how it affects him that she doesn't truly accept who he is, and the need it's left in him to create a family of his own. 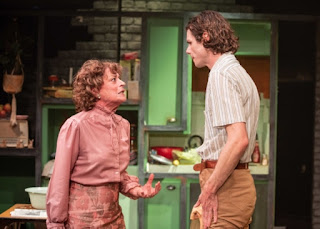 It's a play that asks a lot of its lead and Needham delivers a performance that anchors the show, as well as being surprising in a way - you'd expect a story about a drag queen to start with the tough exterior and reveal the vulnerabilities as it goes on, but Needham's Arnold exposes his vulnerability to the audience from the start, the knocks he gets over the years of the story bringing his anger and strength to the forefront. Fetscher has form playing gay characters who aren't, shall we say, 100% likeable, but forty years of changes in the way we perceive gender and sexuality mean we see his confusion over what he wants a bit more sympathetically than Arnold does. Stegers manages a little hint of humanity in her character's single-minded views, while Lycurgo's bitchy David provides some comic moments to the intense final act. 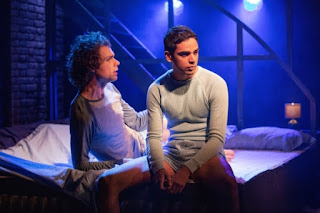 I think Fierstein's cuts to the text have been cruellest to Alan, and I think it means a level of tragedy has been stripped from the story: I don't feel like we got the chance to see for ourselves that he isn't just the pretty rebound boyfriend but he could actually be The One, which means we don't get the full impact of the relationship being brutally cut short. Overall though the production satisfies, entertains and moves. 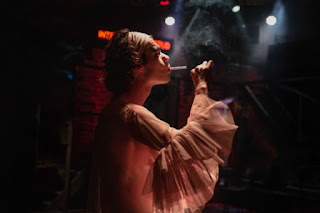 As for the theatre itself, it turns out this isn't the custom-built theatre in the new Battersea Power Station development that's there to get a tax break; no, that'll probably have its intended fate of gathering dust for five years before someone goes "oh no, does nobody want this, guess we'll convert it to flats or a conference venue how sad" etc. This is instead a railway arch theatre in a new development next to the Power Station, and although it's a pretty enough location the launch has felt a bit rushed: The website is very basic, and apart from a sketched map has no directions to the theatre that I could find - pretty unforgivable in a brand-new venue, especially one that's not exactly across the road from a tube station. But the building itself seems organised and clean enough with a decent amount of (non-gendered) loos, so on the practical side a few teething problems but a confident start; and definitely a confident start in terms of Artistic Director Paul Taylor-Mills' opening programming.