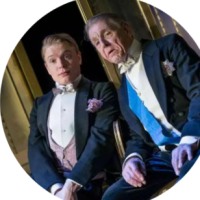 With London theatres now closed for the foreseeable future the focus has very quickly shifted to how those of us who spend far too much time there can get our regular fix from home. Streaming quickly jumped in to take the strain and there should be plenty of culture available soon with the BBC planning a whole online festival, and a number of individual recordings starting to show up. In the meantime there's also a few existing platforms available; Marquee TV is one I only heard of recently, and which seems to lean heavily on the side of opera and dance, so its theatre offerings consist almost entirely of shows I've already seen. Their library does include almost all of Classic Spring's Oscar Wilde season from 2017-18 at the Vaudeville, including one installment I skipped at the time, An Ideal Husband. Jonathan Church directs a Wilde play with a more overtly political slant than most.

Lord Chiltern (Nathaniel Parker) is an MP seen as a rising star, whose progress has been helped by his huge wealth but who's so far managed to hold on to a reputation as an unusually principled and squeaky-clean politician. 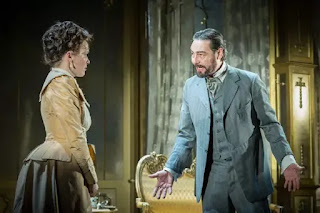 When he's blackmailed with the fact that his fortune comes from insider trading it could spell the end of his career, but he's also terrified it'll torpedo his marriage, as his wife Gertrude (Sally Bretton) labours just as much under the misapprehension that he's purer than pure. This being a Wilde play, Chiltern's saviour could be the most outwardly caddish character, Lord Goring (Freddie Fox,) a suitor to his sister Mabel (Faith Omole.) One of the production's major selling points was the pairing of Fox with his real-life father Edward Fox as Lord Caversham, and the running joke about the father's offhand reminders of how underwhelming he finds his son is one of the show's highlights. 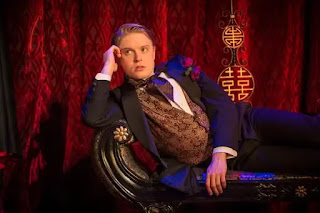 Fox Jr. is inevitably the scene-stealer as he gets the majority of the trademark witticisms, but Bretton is also good at convicing in a more earnest role than most that surround her, while Frances Barber is a viciously nasty little piece of work, who plays the blackmailer. Joanna van Campen and Rebecca Charles aren't on for long but they make an impression as joined-at-the-hip married ladies scandalised by the lack of offers they're getting for extramarital affairs. 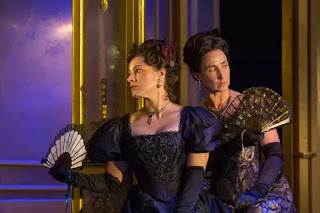 As I often find with Wilde, the author cramming as many quotable lines as possible into the script sometimes makes it feel like the action's treading water, waiting for the plot to get going again. But otherwise I can see why An Ideal Husband is the second most-frequently produced of his plays after Earnest. It holds together well as a comedy that even toys with the conventions of farce in its third act, but some of its satirical intent still holds up in its criticism of hypocrisy in both politicians and the relationship of the sexes: When Chiltern's past is inevitably revealed to Gertrude he essentially blames her for putting him on such a pedestal, despite the fact that he never attempted to take himself off it until forced to. I don't know if it's just the way it comes across on film but Simon Higlett's set and Howard Harrison's lighting make something incredibly murky out of Chiltern's gilded world which feels appropriate to the darker side of the story, and this a production I'm glad I caught up with eventually.

An Ideal Husband by Oscar Wilde is available on Marquee TV, which has extended its free trial period to 30 days for the duration of the public health crisis. Their collection of Classic Spring's Oscar Wilde season also includes A Woman of No Importance, Lady Windermere's Fan and The Importance of Being Earnest, and you can find reviews of most shows in their theatre library on this blog.