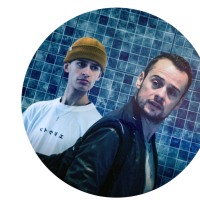 The Mikvah Project feels a bit of an unlikely play to get a major revival within a few years of its premiere, when I was interested but not entirely convinced by it. But I've got a certain reputation to live down to as far as plays with extensive male nudity go and besides, I wanted to know if a different perspective would make it feel a bit more focused than it seemed last time. And Georgia Green's production - her professional debut, following its appearance last year as part of an Orange Tree new directors' showcase - does go some way towards filling in some gaps. The Mikvah is a Jewish ritual bath, more commonly used by women, but there are ones available for men as well, like the pair in Josh Azouz' play who meet there every Friday for particular reasons of their own. 35-year-old Avi (Alex Waldmann) goes to pray for the child he and his wife are trying to conceive (or as he puts it, he's praying to his balls.)

17-year-old Eitan's (Josh Zaré) reasons are vaguer: He might be seeking spiritual guidance about the feelings he's having for another man, but since that man is Avi it's more likely he's going where he knows he can see and befriend him. 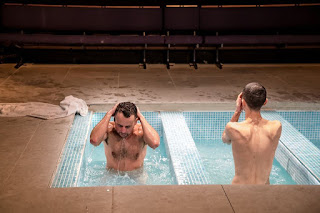 As the Mikvah is meant to be dug in the ground, the Orange Tree's setup in the round with a central pit means designer Cory Shipp can utilise this to make it the central feature, although much of the action takes place outside it. It also doubles as a swimming pool in a plot development where Eitan convinces the older man to go on a secret holiday with him (it's a plot point that, given everything else we see of Avi, I don't really buy, and one of the things that stops the play from quite hanging together for me.) It does provide a focal point for a story that plays on the idea of rituals even as Eitan rejects the ones he's grown up with and tries to make his own with Avi. 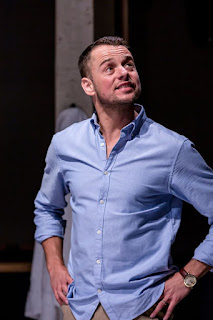 Fun fact, Alex Waldmann's brief nude scene in Cheek by Jowl's Troilus and Cressida was the first time I came up with the idea of celebrating with scrolling text, so there's something coming full circle with the
FULL-FRONTAL MALE NUDITY ALERT
he shares with his co-star a few times over the course of the play. At this point with a play with plot-relevant male nudity where religion is significant I'd wonder how the casting director goes about calling only for actors who can pass for traditionally Jewish; but maybe I shouldn't have been quite as surprised as I was when Zaré turned out to be religion-blind casting*, which I guess is something we can add to colour, age and gender-blind casting. 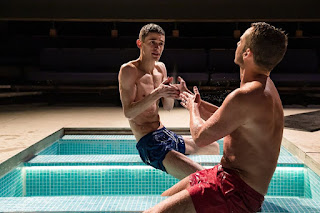 Ultimately although I still think there's something a bit underwritten about Azouz' play, Green's production makes a strong case for it as a meditation on faith, sexuality and friendship, and the crossroads where those things aren't compatible with each other. I guess I kind of expected it to be more the tragedy of Avi having to give up one aspect of his personality in favour of another‡ but instead it's more of a gently sad shrug at having to balance up the things he wants - the somewhat nebulous relationship with Eitan versus his faith and desire for a traditional family - and in that respect the play works.

The Mikvah Project by Josh Azouz is booking until the 28th of March at the Orange Tree Theatre remaining performances now cancelled.

*and before anyone says anything yes, I know there are modern Jewish parents who are turning against circumcision, but the play makes it clear both men come from a pretty Orthodox background, and there's even a fairly graphic description of a bris

‡I think the original production also marketed this slightly more as an LGBTQ+ play, which probably meant a difference in expectation compared to this time
Posted by nick730 at 18:09