An intimate piece of theatre, created specially for streaming at home: Nearly a year into lockdown, can a one-act two-hander feel too different from a one-off TV drama? Natalie Abrahami has some ideas on how to make this feel, if not quite like theatre, like a hybrid of the two mediums as she directs Lorien Haynes' tragicomedy Good Grief for the screen. Adam (Nikesh Patel) has lost his partner Liv after eight years of cancer. Their friend Cat (Sian Clifford) is the last one left at his house after the wake, and one of the people who it seems best understands, if not entirely approves of, his eccentric ways of grieving. These include compartmentalising Liv's belongings around a house that's now far too big for just him in rooms like "the sad room" and "the boring room," and a lot of inappropriate humour, like opening the eulogy by mentioning Liv's extraordinary promiscuity before they got together.
The relationship between Adam and Cat is fractious but tender, and much as they protest there's no sexual tension there's an inevitability to the story, which builds to them "platonically" sharing a hotel bed at the play's halfway point, the second half dealing with the fallout and the question of whether this was a one-off release of pent-up emotions or the start of something real. 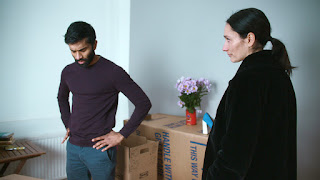 The last twelve months have been dominated by death so it might not seem the ideal subject for an evening's entertainment but Haynes has tapped into the cathartic possibilities of stories like this, and the cast of two give moving, naturalistic performances. Indeed, for much of the play this could be a BBC2 drama, but it's in the stylistic choices and Natalie Pryce's design that Abrahami makes the piece retain its theatricality: Filmed in one room, most of the props and furniture are cardboard boxes, with only captions and lighting changes clueing us in on the locations and the passage of time. In between scenes we see the crew making set changes, and there's no attempt to disguise them reflected in Cat's shiny bike helmet. With the communal element of theatre not an option at the moment, it's interesting to see how different people have attempted to bring something of its atmosphere to the screen, and in making the audience's imagination play its part in creating the play's landscape she's hit on something that does feel genuinely theatrical.
Good Grief by Lorien Haynes is streaming on demand until the 15th of April on Original Theatre Online's website.
Running time: 50 minutes.
Photo credit: Original Theatre Online.
Posted by nick730 at 22:25