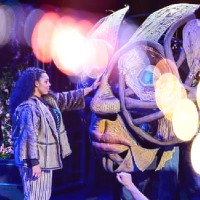 Intended as Southwark Playhouse's first big show of 2021, The Sorcerer’s Apprentice went the way of... everything else in recent months, although Richard Hough (book and lyrics) and Ben Morales Frost's (music and orchestrations) musical was among the luckier ones, in that the production got to finish rehearsals and actually perform in The Large. To no live audience, of course, but for a recording that's streaming "as-live" on the stream.theatre platform for the next few weeks. It's based on the Goethe poem that is of course best-known for its adaptation in DisneyTM's Fantasia©, and little suggestions of Paul Dukas' music do find their way into Morales Frost's compositions. But this is essentially a new treatment of the material, starting with a new story that expands on Goethe's simple fable about not trying to run before you can walk.
Hough still makes it a fable, but one about global warming and the overuse of natural resources, as the setting is Midgard, where the Aurora Borealis powers the magic of permanently furious, widowed sorcerer Johan Gottel (David Thaxton.) 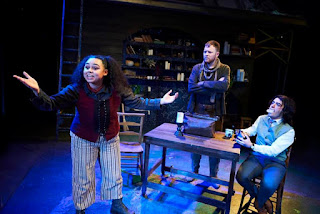 It's also been exploited in this universe's own industrial revolution by Fabian Lyddeker (Marc Pickering,) whose factory harnesses the Aurora to provide light for the dark Scandinavian winters. When Gottel warns the town that the factory is permenently draining the Aurora of its power it's (fairly understandably) assumed that he's making it up so he can keep all the magic for himself. But while he tries to find facts to back up his claims, his daughter Eva (Mary Moore) goes behind his back to take matters into her own hands. 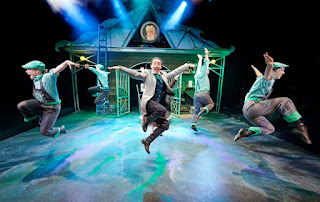 Charlotte Westenra's production is both slick and warm, with detailed designs from Anna Kelsey, a few bits of practical magic from Scott Penrose and sinister puppets from Maia Kirkman-Richards and Scarlet Wilderink. These, plus an enthusiastic cast that look excited to be back at work even in less-than-ideal circumstances, are doing a lot of heavy lifting but it's not quite enough to stop me from feeling distinctly undewhelmed by the musical itself, which feels several drafts away from being quite polished: With only the bare bones of a story provided by Goethe, what Hough has built around it feels all over the place, with the various strands not quite fitting together, the main threat essentially wandering off for much of the second act, and a sweet but very much cursory romantic subplot for Eva and visiting scientist Erik (Yazdan Qafouri.) 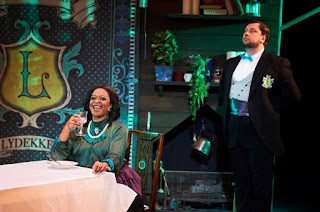 In other circumstances the inclusion of Fabian still being looked after by his Nanny (Vicki Lee Taylor) might be an entertaining dig at the likes of Jacob Rees-Mogg, but it's out of place when his codependent relationship with his mother Lamia (Dawn Hope, who gets the show's best line in "you don't have to be Oedipus to love your mother,") is a major part of the story. As for the songs, a couple ("Spellbound," "Brand New Me," "Damn You") feel like they've got showstoppers somewhere in them, but all seem to trip over their own lyrics sooner or later. I think much of this would have been a lot more forgivable live; Moore's businesslike likeability and Pickering's cartoonish comedy would have certainly got an audience onside in the Large, the rougness around the edges would have felt less exposed - nearly a year into streamed theatre of one kind or another its strengths and weaknesses as a medium are becoming clear, and one way a show feels very exposed on screen is that without the advantage of a dark, shared space, if it loses the audience's attention briefly it's much harder to get it back.
The Sorcerer's Apprentice by Richard Hough and Ben Morales Frost, based on the poem by Johann Wolfgang von Goethe, is streaming until the 14th of March at stream.theatre.
Running time: 2 hours 15 minutes including interval.
Photo credit: Geraint Lewis.
Posted by nick730 at 16:54