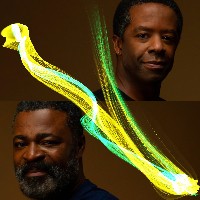 Another play that had hoped to be part of the first wave of theatres reopening has instead had to be reimagined for live streaming at home: Lolita Chakrabarti's new play sees her once again, nine years after the international success of Red Velvet, team up with her husband Adrian Lester; in Hymn he plays another charismatic character, although perhaps not this time with quite the same depth to back it up. We meet Lester's Gil giving the eulogy at his father's funeral, a family man who built up a small business empire of dry cleaners and stationers. Whether the father Gil describes was quite the open book he thought is put into question immediately after the service though, with the revelation that Benny (Danny Sapani,) only six days younger than Gil, may be his half-brother: It was only when she saw the death notice in the paper that Benny's mother admitted the identity of the married man who got her pregnant then abandoned her.
With his mother's mental health quickly deteriorating Benny spent much of his childhood in care; growing up under the shadow of three high-achiever older sisters Gil's always felt pressured but has always had the support of a large extended family. 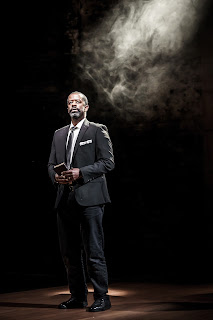 But as they both approach their 50th birthdays the two men share a lot of similarities in both their warmth and their insecurities, and after a spiky, suspicious start they start to bond. Chakrabarti's story isn't about surprises - from the soap opera premise of the opening scenes to the way casual mentions of Benny's hard-earned savings carry ominous suggestions of dodgy business deals to come it almost feels like she's deliberately throwing familiar tropes at the audience so they can predict the outcome. Instead the play's freshness comes from the unexpected styles she finds to let these tropes unravel: In the pre-show videos the cast describe Hymn as a love story, and there is indeed something of the romantic comedy in the giddiness with which the two men discover the new person in their lives. 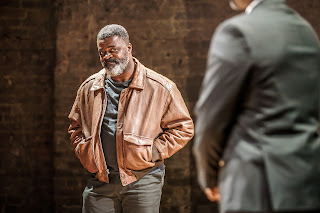 And as the title suggests there's a strong musical element to this discovery and to the play, with the actors occasionally breaking into songs from Benny's beloved jazz standards to punctuate the story, and the central scene showing the absolute glee that exists between them as they relive the eighties hits of their teenage years. There's a real joy and humour to the play even as it's apparent that things are unlikely to end well (although, spoiler alert, I would call it a minor plot twist that this downfall doesn't come from Gil's business plan being genuinely baffling - people will want to buy ring binders that match their shirts, because Zoom meetings?) 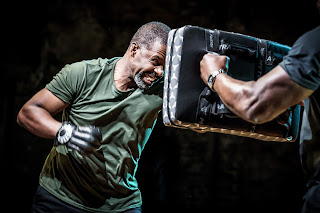 Blanche McIntyre's production complements the subtlety of the writing and the performances, with Miriam Buether's simple set and costume design referencing the dry cleaning business the men's father spent his life on, and Prema Mehta's lighting and Gregory Clarke's sound design lending a lot of atmosphere. It's a striking and moving play, and apart from the silence after funny lines and at the final bows you often forget it's playing to an empty auditorium - it would no doubt be even better to be in the same room as Lester and Sapani but the Almeida's sensitive staging of it for streaming almost makes you forget that you're not.
Hymn by Lolita Chakrabarti is streaming until the 21st of February on the Almeida Theatre's website.
*edit* Now also available to stream from the 3rd to the 9th of March.
Running time: 1 hour 30 minutes.
Photo credit: Marc Brenner.
Posted by nick730 at 21:42