Theatre review: The Corn is Green 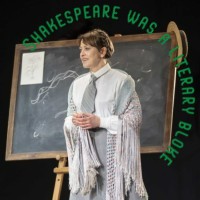 Future Dame Nicola Walker gets the top billing she's always deserved as the Lyttelton revives The Corn is Green, Emlyn Williams' semi-autobiographical play about escaping the narrow constraints put on the people of a remote Welsh village by class, poverty, and the simple expectation that things will always be as they have always been. Somewhere in North Wales, the locals are sent down the coal mines from the age of ten, most never learn to read or write, and nobody can imagine a future where the next generation doesn't do exactly the same dangerous work as their fathers. It's certainly not a thought the local landowner, referred to only as The Squire (Rufus Wright) would want to encourage - as the majority shareholder in the mines, a steady supply of cheap, uneducated labour suits him well. So he's unimpressed when Miss Moffat (Walker) arrives, having decided to spend a recent inheritance on opening a school in the village.
She's determined to prove that it's only their circumstances that prevent the miners from achieving their potential, and soon finds an inspiration in Morgan Evans (Iwan Davies,) whose natural writing talent she cultivates, making him her star pupil. 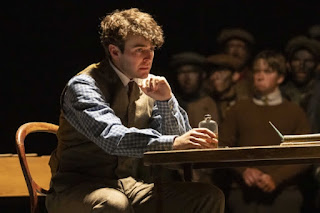 Dominic Cooke's production initially strips the stage of set, props, and even some elements of the actors' performances, instead putting the playwright Emlyn Williams (Gareth David-Lloyd) on stage to narrate every entrance, exit and stage direction. The conceit is that, some years after the events that inspired the play, Williams is somewhat out of place at a cocktail party, when the idea for the story comes to him. He starts to build its fictional world and characters, putting them into place and setting them to action. As the story takes shape and he gets more confident in the telling he acts more as an observer - the actors start to inhabit their roles more completely, props start to appear on stage rather than just being described, and by the time the curtain rises after the interval designer ULTZ' detailed set has filled the empty expanses of the Lyttelton. 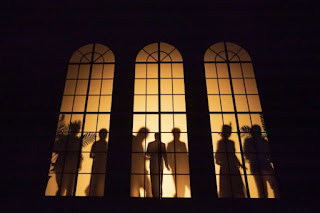 It's a conceit that works particularly well with the story's progression of a young man with natural talents learning how to hone and contextualise them. If Morgan, Williams' alter ego in the play, had tried to write it at the start we might have got something with raw power but little elegance or story. Instead, as the world of the play becomes more concrete, so the story becomes more complex. It's implied the "semi" in semi-autobiographical is doing a fair bit of heavy lifting, as at one point Williams even interrupts the action to change its direction to something more satisfying: He wants people to know his story, but perhaps realising 1938's theatre audiences might not flock to a play about a young man quietly taking his exams, has added a melodramatic subplot to hang some additional peril over the question of whether Morgan will win a scholarship to Oxford. 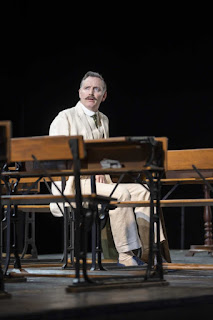 Miss Moffat is a gift of a role and it's a joy to see Walker play her, as she's someone the audience can enthusiastically get behind, but far from unproblematic. The village has become overwhelmed by the class system, and she's the first person in a long time to arrive and not automatically give deference to the idiotic Squire: Her easy manipulation of him into thinking doing what she wants is his own idea makes for some fun scenes, and with a person in charge who thinks a Master's Degree is something his father buys for him, and is happy for the poor to rot and even die in his service, it's not hard to see why the National thought the play was ripe for revival now. The aspiring schoolmistress also quickly helps Mr Jones (Richard Lynch) and Miss Ronberry (Alice Orr-Ewing,) two well-educated locals hamstrung by their reliance on the Squire, to find a purpose in their lives. 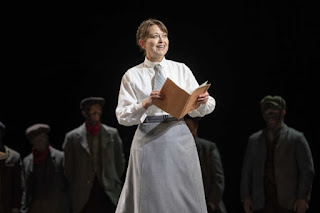 But there's much about Miss Moffat that's harder to like, not least of all her difficulty showing empathy: While she's enthusiastic about educating the miners in the abstract, when faced with Morgan one-on-one she has a tendency to boss him around and treat him as just a repository for knowledge, which is in danger of alienating him. And while on the one hand she's determined to strike against the system that put the Squire in charge, there's still something imperialistic about the way she goes about helping the locals: It probably goes without saying that, although some of the miners only speak Welsh when she arrives, when she wants to teach them all to read and write she means, of course, in English. 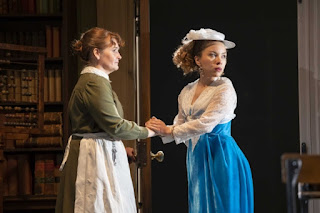 She has a nemesis in Bessie Watley (Saffron Coomber,) one she both partly created herself, and is barely aware of until it's too late: In theory the working-class daughter of her housekeeper should be someone Miss Moffat is every bit as enthusiastic about educating as the locals, but in reality Bessie doesn't fit the romanticised notion of her bringing grubby-faced miners out of the darkness, so she ignores her. The one time Bessie stands up to her, Miss Moffat's immediate reaction is to have her sent into service. And her belief in women's equality only goes so far - in a subplot about an unwanted pregnancy, she makes it very clear who she thinks bears all the responsibility. 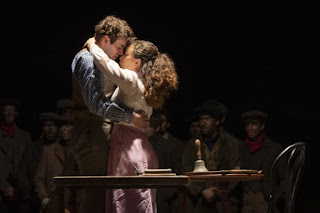 Some of this is probably more down to a misogynistic undertone from Williams than anything else, as Miss Moffat is the only one of the women to be drawn with much complexity: Bessie is mostly made up of malice, with a creepily coquettish liking for sweets and dressing like a much younger girl; her mother (Jo McInnes) mainly serves as a punchline about the Salvation Army; Miss Ronberry is as wet as she is likeable. Still, whether all of it was intentional or not, Williams has delivered an incredibly complex central female character for Walker to get her teeth into. 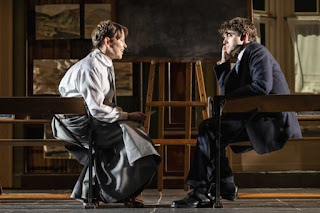 Not everything works - there's a sudden info-dump of plot in the second act that ends up very soapy (although the production playing it quite tongue-in-cheek pretty much salvages it.) And while a choir of miners undeniably adds atmosphere, it's such a honking great cliché in Welsh stories that I could sometimes hear Jan getting the giggles next to me when they showed up. But in most regards this proves well worth the rediscovery: A crowd-pleasing "inspirational teacher" story with a bit of bite, a story that doesn't quite go where you think it's going, and some topical relevance about those who believe they're entitled to power, all in a production that interestingly deconstructs the story's themes even as it tells it.
The Corn is Green by Emlyn Williams is booking until the 11th of June at the National Theatre's Lyttelton.
Running time: 2 hours 45 minutes including interval.
Photo credit: Johan Persson.
Posted by nick730 at 23:32