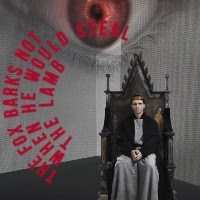 After a couple of years kept away from Stratford-upon-Avon by Miss Rona, followed by a further delay caused by Miss Eunice, it is at least apt timing that I should return to the RSC on Shakespeare's birthday. And, leading up to the end of Gregory Doran's tenure there and the conclusion of his staging the Complete Works (some exclusions apply, the amount of plays we say Shakespeare wrote may go down as well as up) that began with Richard II, the inevitable end point was the series of Henry VI plays leading up to Richard III. The play usually known as Henry VI Part 1 is probably Shakespeare's least-loved work and the company must have been dreading having to convince people to come see it, so they used the excuse of lockdown to present it as a streamed rehearsed reading, aka Let's Not Stage It And Say We Did. Which does have the added advantage of being able to skip ahead and present a trilogy of plays that were actually intended as such.
So this new history cycle starts with the sixth play in the sequence, but the first in writing order. Originally titled The First Part of the Contention Betwitxt the two Famous Houses of York and Lancaster‡, people have for some reason always been keen to call it something snappier; for Owen Horsley's production that's Henry VI: Rebellion. 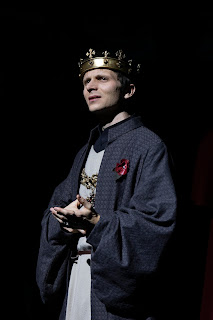 We begin with the marriage of Henry VI (Mark Quartley) to Margaret of Anjou (Minnie Gale,) a gesture of peace towards France but one in which, as soon as they read the fine print, the nobles realise England seems to have made all the concessions. It marks the realisation that Henry and his advisors are in a weak position, and the beginning of a power play that will eventually break out in civil war. But (even though costume designer Hannah Clark has already given the characters red and white roses to clue us in to who's who,) the factions haven't really formed themselves yet. 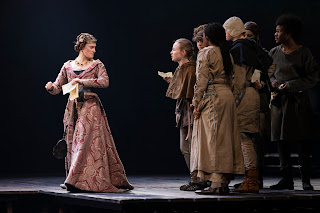 So the play is quite an episodic sequence of grabs for power, which Horsley has dealt with by splitting it into three distinct chapters, marked by two intervals (one 20 minutes long, one 10.) The first chapter deals primarily with the Duke of Gloucester (Richard Cant,) the Lord Protector who's stayed in the job even though Henry is now old enough to rule in his own right. His wife Eleanor (Lucy Benjamin) sees herself as a Lady Macbeth type, egging him on to make themselves King and Queen for real, and even invoking supernatural help. When she's caught it starts Gloucester's downfall, and once he's dead the accusations and plots can start in earnest, leading to the chaos of the middle chapter. 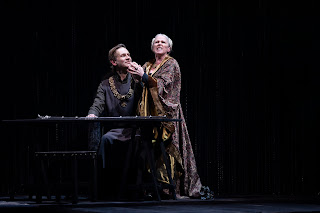 This is only the second time I've seen this play presented as a single production (it's usually conflated in some combination with the other plays in the sequence,) so I'm not familiar enough with it to say confidently how much, if at all, the scenes have been rearranged, but this compartmentalising of the various story threads is an effective way of stopping the action from getting too muddled. It is, after all, a lot of men with the names of counties (Paola Dionisotti's Winchester is the only gender-blind casting among them) fighting for three hours, so focusing on the notable events in this play, rather than how they set up the next two, makes it a more coherent experience. 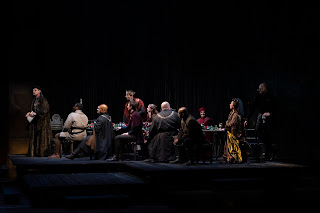 It's still prone to being a bit dry (it's hard to believe this was the first big hit that made Shakespeare's name) but the company do try to keep it fresh: Gale's Margaret isn't quite the formidable force she'll become yet, she's too enamoured with Ben Hall's Suffolk and frustrated at her husband's lack of drive. But there's certainly signs of the fearsome craziness she's capable of once her lover dies, and she spends the rest of the play cradling his decapitated head. 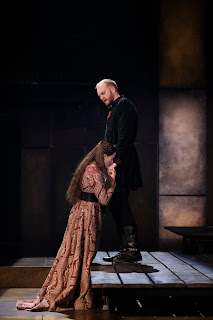 Suffolk's end is death-by-pirate, giving the show a central action sequence before the titular rebellion of the final chapter: While everyone's been infighting the real threat, the Duke of York (Oliver Alvin-Wilson,) has been happy to keep a low profile, instead quietly sponsoring a popular uprising led by Kent bricklayer Jack Cade. Aaron Sidwell plays Cade almost as a music hall performer, a flamboyant man of the people who gets the crowd chanting his catchphrases until the other side comes up with a better one (involving them getting paid for delivering Cade's head.) There's also a feeling that Cade believes his own hype about being the long-lost true heir, adding another touch of madness to a story that started with backstabbing and has quickly descended into all-out chaos. 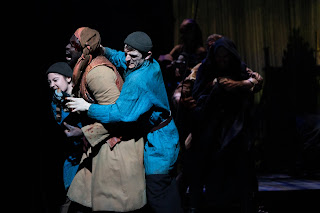 Henry himself is the deeply religious man who'd probably much rather be a priest than a king, but Quartley doesn't particularly play him as an otherworldly childlike figure - more as someone who knows everything's crumbling around him but is too ineffectual to put it back together. By the end only Nicholas Karimi's Warwick doesn't seem to be actively plotting against him, but the white rose on his costume suggests that won't last long. There are many reasons the play usually known as Henry VI Part 2 isn't produced very often, and this Rebellion version of it doesn't quite disguise all of them, but it does take advantage of the opportunities for action, humour and intrigue the play offers.
Henry VI: Rebellion by William Shakespeare is booking in repertory until the 28th of May at the Royal Shakespeare Theatre, Stratford-upon-Avon.
Running time: 2 hours 50 minutes including two intervals.
Photo credit: Ellie Kurttz.
‡Shakespeare was no good with titles, why else are half the comedies basically called *shrug*?
Posted by nick730 at 22:23