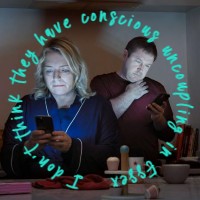 After what was meant to be a busy couple of weeks of theatregoing got derailed by me catching Covid, my first show back since testing negative again is the second in a loose trilogy about relationships: Beginning, the hit play about the first couple of hours of a brand-new relationship, was intended as a one-off, until writer David Eldridge decided during previews that it could in fact live up to its title, and begin a cycle of plays about relationships at different stages. So five years later we get a different couple whose marriage is, the title tells us, somewhere in the Middle. Although that's not how it initially feels when Maggie (Claire Rushbrook) gets up in the middle of the night to make herself a hot drink because she can't sleep, and husband Gary (Daniel Ryan) follows her downstairs, asking what's wrong. Her reply doesn't beat around the bush: "I'm not sure I love you any more."
This is a completely independent play from Beginning although there are similarities, particularly in structure: It's another two-hander taking place over a single long scene, set in the wee small hours of the morning. And with references to Bros for some reason. 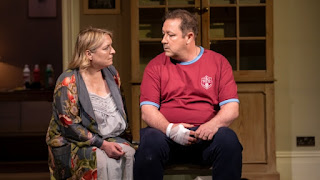 There's also some thematic links - where some of the pressure on the new relationship was caused by a woman's biological clock ticking, we discover that children have also been an issue in this 12-year marriage, with the couple having had trouble conceiving and carrying a baby to term; they do now have an eight-year-old daughter, asleep upstairs, but Maggie feels some resentment over how her independence has been sublimated into motherhood, while Gary still wishes their family had been bigger. When Maggie drops her bombshell, he spends a long time ignoring it - making small-talk about the pork joint he's planning to roast the next day - but eventually he has to confront not only her dissatisfactions with the marriage, but his own. 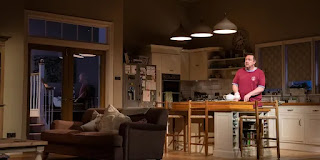 There's a lot to unpack: In a link to another Eldridge play, Market Boy, Gary is a former market trader who moved on to the stock market; now pushing fifty in a young man's game, he's too used to living outside his means to give up the job yet, but among other things Maggie doesn't see a future with a husband she only sees at weekends, who'll likely die of a stress-related heart attack if he doesn't move on soon. But she's also imagined other alternatives for herself, and although she isn't actually cheating on Gary she has met someone she's considered leaving him for. But as the night and the conversation go on, it does seem like she's exaggerated the likelihood of anything happening with her policeman friend, and I even started wondering if he actually existed. 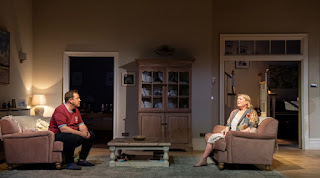 However where Beginning was a very enjoyable character study with the occasional flaw of dropping into cliché, Middle for me suffered too much from the latter, and as a result I never really felt invested in the pair - I'm afraid Maggie saying "you only had to look after one child, I had to look after two" was where I mentally checked out, and a sudden burst of violence seemed to come out of nowhere and be there mainly to break up the conversation. It means the evening ended up being a circular argument of grievances, not necessarily following a logical progression - highly realistic, but not necessarily dramatic. There are definite high points in the dialogue - one of Eldridge's talents is in finding an almost surreal humour in the banality of conversations about things like sports biographies - and Polly Findlay's production is built on two very strong performances. 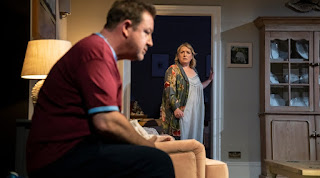 Jan did say he found the extreme detail - back rooms and hallways that never get used - in Fly Davis' set a bit distracting. I did wonder if it was really the naturalism of the set, or the fact that it seems too pristine and unlived-in; possibly a deliberate nod to the fact that there's something clinical about their too-big house that reflects how they're not much of a family any more, but regardless I'm not sure a couple of toys tidied under the coffee table sold it to me as a house with an eight-year-old in it, especially not one we're led to believe is quite spoilt. Still it does lead to one memorably stark moment as all of Rick Fisher's lights get turned on so the couple can clean up a mess, and it's a relatable reminder of the way all the lights coming on in the middle of the night can be a discombobulating experience. Middle has the ability to give you a sudden, different perspective on the story being told, but it doesn't use it anywhere near as much as I would want it to.
Middle by David Eldridge is booking until the 18th of June at the National Theatre's Dorfman.
Running time: 1 hour 40 minutes straight through.
Photo credit: Johan Persson.
Posted by nick730 at 22:39