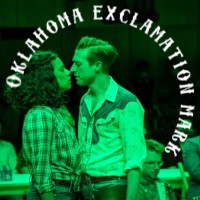 Regular readers of this blog will both know I traditionally have certain reservations about musical theatre pioneers Richard Rodgers & Oscar Hammerstein II - namely that if it weren't for the famous and beloved tunes, their work would fall somewhere between "horribly dated" and "nightmarishly distressing" and not get staged anymore. One of their shows I hadn't seen before - I don't think I've even seen the film - is their original, genre-defining hit Oklahoma! But Daniel Fish and Jordan Fein's production, which transfers to the Young Vic from New York, promised to come with a radical, twenty-first century reimagining of the musical Western about farmers trying to squeeze a bit of singing and dancing in between the relentless dry-humping. Because Fish and Fein's approach to the show is to dispense with any euphemisms and cuteness, and strip it down to a story about people who just want to have sex with each other (whether or not the other party is entirely consenting, because Hammerstein.)
Laurie (Anoushka Lucas) is torn between two men, although she leans more towards the charming cowboy Curly (Arthur Darvill,) than the troubled, jittery farmhand Jud (Patrick Vaill.) Meanwhile Ado Annie (Marisha Wallace) isn't so much torn between travelling salesman Ali Hakim (Stavros Demetraki) and nice-but-dim Will (James Davis,) as she is completely temporarily infatuated with whoever she happens to be with at the time. 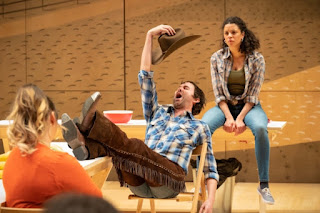 The songs, the most famous of which include "Oh, What a Beautiful Mornin'," "The Surrey with the Fringe on Top," "I Cain't Say No" and "People Will Say We're in Love," stand up well in Daniel Kluger's arrangements, which add the occasional electric guitar update both to freshen up the classics and give a bit more of an ominous tone to a superficially cheery tale with a lot of darkness in it. With the big showstopper taking place at a barn dance, that's the theme for Laura Jellinek & Grace Laubacher's set design, a plywood interior that puts the front rows behind long tables with pots of chilli and tins of light beer. For the most part, the cast stay onstage to watch everyone else's scenes. 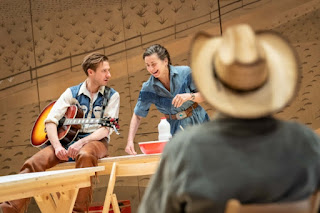 As for the story, Fish and Fein don't pretend there's much of one, at least until a few threads pull together for a grim finale (/happy ending, if you're R&H.) Instead this is mostly 3 hours of the characters humping each other's legs, suggestively peeling corn husks, and bidding on who gets to nosh on the contents of the young ladies' hampers. Liza Sadovy's Aunt Eller says "raspberries and custard" like she's describing a particularly enthusiastic rimming incident. When Curly and Jed have a confrontation in a smoke house, you come away convinced they want to do something to each other involving their fists, although it might not necessarily be punching. 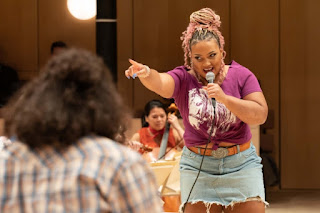 Casting Wallace as an older, sexually forward Annie who'd be scissoring the audience if it wasn't for social distancing gets rid of some of the ick factor of her character, although it's still uncomfortable to watch what's clearly meant to be a not-too-bright young woman be passed around the men of the town with little say in the matter. Oklahoma! also does nothing to disprove my theory that Oscar Hammerstein II definitely killed some people, and seeded messages throughout his work that murder is honestly not a big deal, in fact murderers are just the best, if you haven't even murdered anyone what have you been doing with your life, just in case it ever came out. At least in this interpretation, Laurie's choice being between someone a bit rapey and someone a bit murdery is presented as not a great one to have to make; I'm pretty sure that played straight the murdery one would come across as an unambiguous catch. 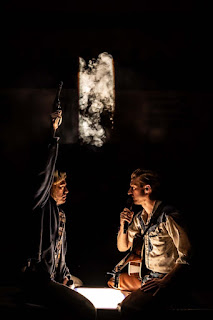 The production also has a few more overtly expressionistic moments that touch on the story's darkness, including literal darkness - a couple of times all the lights go out, only for a projection to appear on the walls of Curly staring lovingly into Jud's eyes and telling him to kill himself because I don't know, flirting was different in them days? And after Laurie takes some "smelling salts" she has a dream sequence where a dancer runs around the stage pretending to ride a horse, or possibly she is the horse, or she might be a fly because she does end up splatted on a wall at one point. Anyway, she does all that, and when she's finished we're all 15 minutes closer to death. 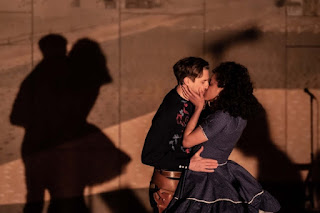 So I can't say everything about the production worked for me, including its length that goes well over the advertised 2 hours 45 minutes*, and some of the staging flourishes work better than others. But If these shows are going to keep getting revived because of the music - and the songs really do come across well here, with a uniformly strong cast performing them with a mix of enthusiasm and subtlety - then I do think this is the way to go about it: Acknowledging that a lot of the stories and characters Rodgers & Hammerstein weave around those songs are at a serious disconnect from a modern audience, rather than handwaving the dark side through as if everything's fine.
Oklahoma! by Richard Rodgers & Oscar Hammerstein II, based on Green Grow the Lilacs by Lynn Riggs, is booking until the 25th of June at the Young Vic.
Running time: 3 hours 10 minutes including interval.
Photo credit: Marc Brenner.
*I know I'm a broken record but seriously, especially when a show's been open for a while, stop announcing a running time based on what a stopwatch said when you did a run-through under laboratory conditions. I know a Young Vic show will start ten minutes late, I know they won't get everyone out and back in again in a 15-minute interval, so FOH definitely know this as well. Once again, people were scrambling to the doors during the finale because, funnily enough, they planned their journey home based on the running time they were told, not the one they got.
Posted by nick730 at 23:55