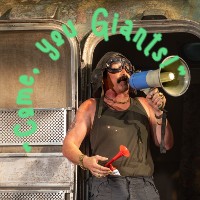 Just as there are a lot of actors who get forever identified with one role, there are also roles that get identified strongly with one actor. But I've never seen so many people insist that it's unthinkable for anyone other than the original star to take over a role, as I have with Mark Rylance and Rooster John Byron in Jez Butterworth's Jerusalem. It's a theory the latest West End revival has no intention of challenging as, 13 years after first playing the role, Rylance returns to Ian Rickson's production. He brings with him some more of the original Royal Court cast, including Mackenzie Crook as Rooster's hapless sidekick Ginger, an unemployed plasterer who insists he's actually a DJ. What he mostly is is off his face, as what brings him to the dilapidated caravan on the edge of a Wiltshire wood is the same as brings most people there: Rooster is the village's resident drug dealer.
So the clearing where he lives is a busy, noisy place usually full of teenagers. The fact that they're all on something most of the time makes it easier for him to hold court with his tall tales, like how he was born with a bullet clenched between his teeth, how he once met the giant who built Stonehenge, or how Shakespeare didn't write Shakespeare. 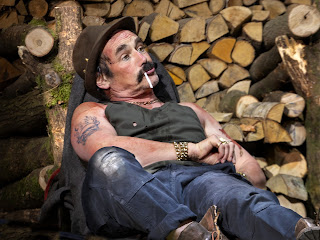 Butterworth's rural epic takes place over a single day - St George's Day, when the village has its annual fair - and there's a couple of running stories coming to a head: Lee (Jack Riddiford) is planning to move to Australia the following morning; the May Queen, Phaedra (Eleanor Worthington-Cox,) has gone missing, and her thuggish stepfather Troy (Barry Sloane) suspects Rooster might be hiding her. Most of all, having squatted on the public land since 1981, it looks like Rooster might finally be evicted by the local council by the end of the day: A petition has been signed by 80% of the residents against Rooster's behaviour, but the real reason is most likely to be that they want to build a new housing development on the land. 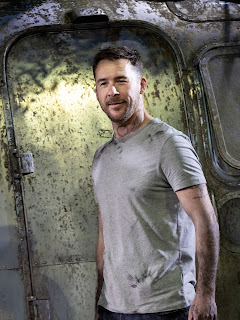 But any plot elements are essentially there to build up the very darkly funny, extended character study, not only of Rooster himself but of the collection of eccentrics and lost souls he surrounds himself with, including Alan David's dotty Professor, Gerard Horan's respectable pub landlord and local councillor Wesley (who's also there to get drugs,) and none more lost than Crook's Ginger, always leaving the clearing because he supposedly has other things to do, always circling right back. Criticisms of the play's treatment of women are fair though: The mother of Rooster's young son, Dawn (Indra Ové,) is the most fleshed-out female character, and even she's not on stage long. 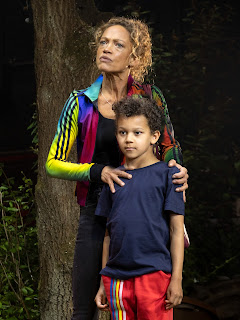 Given the eventful decade between the play's last run and this revival, there's inevitably been a lot of discussion about how it should be reinterpreted in the light of Brexit. And there's certainly material for that in the insularity of the characters, seen particularly in Davey (Ed Kear,) who can't see the point of a world outside Wiltshire, let alone outside England. The play has always had an undrecurrent of this self-mythologising Little Englishness, and a political aspect about these small rural communities that have been happily left to rot in isolation; you could easily extrapolate that into how this is a story about how these people were ripe to be manipulated by people with an agenda. 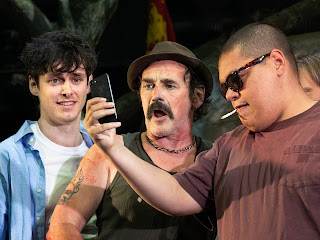 But Butterworth has refused to be drawn on the issue, and I think trying to make the play too much about Brexit risks missing much of what it's really about. Which is a sweeping vision of a kind of Englishness both mythical and grubbily down to earth. I think the admiration for Rylance's performance isn't just about the physical feat of performing a role that's exhausting to watch, never mind play, eight times a week (now 62, he still opens the show by doing a handstand into a tub of water, while his downing a mix of raw egg, milk and vodka is as iconic a part of the show as the live chickens in ULTZ' set.) I think it's because he has such an air of otherworldy weirdness about him that it's hard to imagine anyone else so effortlessly making you question whether there might, actually, be something supernatural about Rooster. 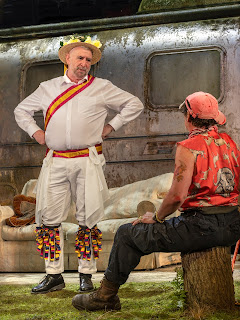 I saw Jerusalem during its original Royal Court run, so although it made an impression it's way too long ago to make any direct comparisons in my reaction to it. Certainly both times I came away feeling physically and emotionally exhausted but also thoroughly entertained. My overwhelming impression about the play's themes is about the wild contradictions in Rooster and the England he represents. As he shambles, limps and slurs his way around the stage it's hard to miss his vulnerability, while in the same breath he can be aggressively, possibly supernaturally powerful and confrontational. As the drug dealer who gets them out of a humdrum life for a while and regales them with tall tales, there's something of the genuine folk hero in the way the teenagers see him; but as becomes painfully obvious in the second act, this doesn't translate to anything like actual respect. There's a genuine spiritual connection to nature (Crook's most notable projects between runs have been Detectorists and Worzel Gummidge, so it's easy to see why this play might be close to his heart,) but the clearing is still piled with litter. 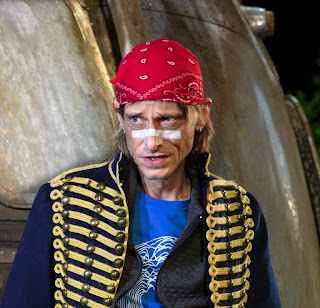 And it's suggested Phaedra may be far from the only teen to be turning up at the caravan to escape an abusive home life; but can we say in all confidence that drunk and drugged 15-year-old girls can be safely left alone with Rooster Byron? Perhaps the reason Jerusalem has attained such a quasi-myhtical status of its own is how successfully Butterworth, Rickson and Rylance have created in Rooster a character who so persuasively feels like a piece of folklore who's been in the public consciousness far longer than since 2009. He's like a classic mythological trickster figure, the undisputed star of any story and most charismatic person in the room who you want to see pull the rug out from under authority, but at the same time not someone you could call entirely benevolent. You root for him, but you're never sure if you should. 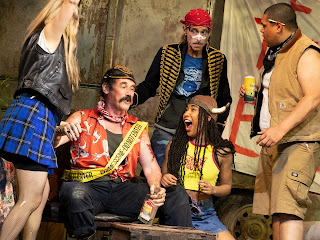 Jerusalem's return to the stage has of course been as much of a juggernaut as ever, and tickets are almost impossible to get; despite the huge hype it's got to live up to, those who manage it are unlilkely to be disappointed. It's not a perfect work, with a few too many of the characters' dodgy attitudes going unchallenged, and it's certainly indulgent in its running time (which puts the longer of its two intervals after the first act; the second is just a five-minute pause, so the last two acts essentially make for a soild two-hour block, plan toilet trips accordingly.) But it's also the rare show that justifies that indulgence as it builds to its devastating but suitably ambiguous finale.
Jerusalem by Jez Butterworth is booking until the 7th of August at the Apollo Theatre, Shaftesbury Avenue (returns and day seats only.)
Running time: 3 hours 15 minutes including two intervals.
Photo credit: Simon Annand.
Posted by nick730 at 23:56