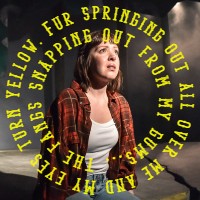 Ché Walker wrote Wolf Cub in Atlanta, in the aftermath of Donald Trump's election in 2016. While people around the world wondered how it could have happened, for Walker it seemed obvious the seeds were sown decades earlier, by another Republican President who was a celebrity before he was a politician, who used polarising language to turn Americans against each other and demonise the poor and minorities. Crucially for this story, Ronald Reagan also survived an international scandal, in which in order to interfere with a foreign nation's election results, both arms sales to Iran and an influx of drugs into the US were fair game as fundraisers. Wolf Cub tells the story of the Reagan (and Bush) years through the experiences of Maxine (Clare Latham,) who when Reagan first comes to power is a nine-year old living with her father in the rural South. Her mother having apparently fled years earlier, she's left alone to deal with her father's physical and emotional abuse.
When he moves them to Los Angeles a few years later, Maxine meets a boy who's in over his head with local drug dealers. Her exposure to a violent culture inspires her to finally take drastic action against her father - and gets her an invite into the gang. 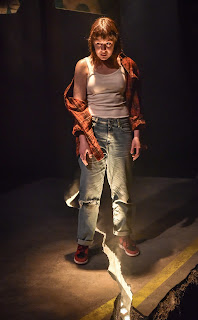 This is a short and sharp monologue that sees Maxine become a major part of the criminal operation - there's no real acknowledgement from her of the lives a lot like her own that she's helping to ruin - but posits her as a fighter and a survivor. The title comes from an early hunting trip with her father: At about the same time as she gets her first period she witnesses a wolf giving birth, and subsequently associates growing up and becoming stronger with the wolf. At times when she feels threatened she imagines herself growing fur and fangs, rejecting victimhood and becoming the predator. 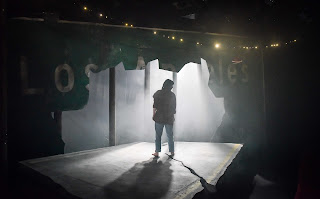 It's a strong performance from Latham in a production Walker himself directs; Amy Jane Cook's design channels the play's climax at the Rodney King riots and the Northridge Earthquake (conflated here for dramatic effect) to make for an apocalyptically dramatic set, and Sheila Atim's music offers a sense of place to help the story feel like a journey (Atim must think Walker's her lucky charm, every time she composes a show for him she wins an unrelated Olivier Award.) It makes for a violently atmospheric evening, although ironically nothing about the play itself was as interesting to me as the way the programme notes implicitly draw a link between Reagan's discriminatory "War on Drugs" and the crack trafficking that helped fund his pet cause.
Wolf Cub by Ché Walker is booking until the 7th of May at Hampstead Theatre Downstairs.
Running time: 1 hour 15 minutes straight through.
Photo credit: Robert Day.
Posted by nick730 at 22:09