PREVIEW DISCLAIMER: Tim Rice says he doesn't believe in long preview periods, but his producers do so the official reviewers are being kept at bay until next week. 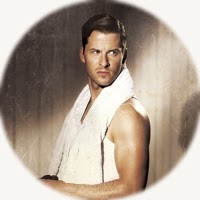 Although based on a novel by James (not Earl) Jones, the film of From Here To Eternity is so well-known it probably qualifies Tim Rice's new musical as the latest in the movie-to-musical trend. Rice has teamed up with composer Stuart Brayson to tell the story of US soldiers stationed in Hawaii in late 1941, knowing that they're bound to be joining World War II sooner or later but not realising the incident that draws America in will come to them directly. In the meantime they're in a limbo state with little to occupy their time. Newcomer Robert E. Lee Prewitt (Robert Lonsdale) is a boxer who no longer boxes, a bugler who no longer blows the bugle, and uninterested in casual sex, which marks him out as different to the other soldiers. He falls in love with Lorene (Siubhan Harrison,) a prostitute who's also uninterested in casual sex, which marks her out out as a woman who makes poor career choices.

Meanwhile his Sergeant, Milt Warden (Darius Used-to-be-Danesh-but-now-Campbell-because-it-turns-out-half-Iranian-isn't-a-great-look-when-you're-trying-to-break-the-States) is embarking on an affair with Karen (Rebecca Thornhill,) the wife of Captain Holmes (Martin Marquez - until this very moment I thought it was his brother but in my defence they do look very alike and it's a big theatre.)

I suspect From Here To Eternity isn't going to do much for the Shaftesbury Theatre's recent record of short runs, but it's not a complete car crash - actually once or twice I was wishing it was a bit worse so it could at least have some "so bad it's good" appeal. I'm not saying it's a good show, it's not, but it does have one saving grace and it's quite an important one in a musical: The least famous of the creatives has come up trumps, Stuart Brayson's songs are a bit old-fashioned but most of them are enjoyable foot-tappers, there's a bit of variety in them as the show goes on, and some of the refrains were even going round my head on the way home - something you couldn't say for the otherwise far superior Light Princess. 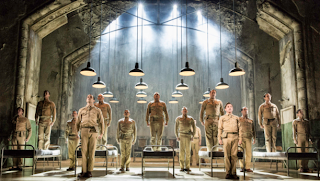 The trouble with Brayson and Rice's songs, in the first act especially, is that they're too far apart, leaving far too much of Bill Oakes' dreadful book in between. The story's problematic to begin with - a leading man who's entirely defined by what he's not (a boxer, a bugler, a shagger) doesn't leave much room for us to figure out who he is, and by the interval Jan hadn't even noticed that Lonsdale was the male lead until I pointed it out to him. There's two romantic relationships, both of which happen because it says so in the script and not because of any apparent spark between the couples. And the dialogue feels all the creakier thanks to the lack of chemistry between Darius and Thornhill, as what was probably meant to be a sparky back-and-forth is tossed lazily around. Thornhill looking uncannily like Jennifer Saunders doesn't make the whole thing feel any less like a spoof. 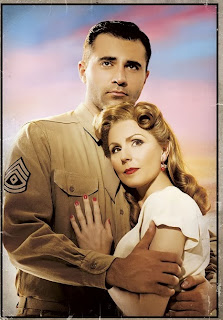 The connection between the two couples barely registers either - when Prewitt arrives at the start it's briefly alluded to that Warden knows him, but then they have no further contact until they duet near the end and Warden announces Prewitt is his best friend. Ryan Sampson as Private Angelo Clearlydoomedfromthestart has the distinction of squeezing out the sole audience laugh in the first act. 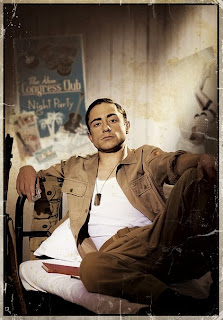 The production has other problems as well; Soutra Gilmour's designs are suitably lavish but what's on them is often laughable. Perhaps taking the music's old-fashioned sound as its cue, Javier de Frutos' choreography for the soldiers has more than a touch of the West Side Story to it, leading the show to look like the story of how jazz hands won World War II. And you'd think with no actual fighting to do the company would have got round to getting their drills right, but never mind the talking back to officers - their marching alone would probably have got them court-martialled. And while a 1941 setting means some attitudes and language no longer acceptable are to be expected, Oakes' script handles the racist language clumsily, and director Tamara Harvey has trouble finding a way to couch it from a modern perspective. A crucial plot point sees the soldiers go to a gay bar where the local gaiety pay to do nonspecific things with them, and the associated scenes end up just deeply uncomfortable. 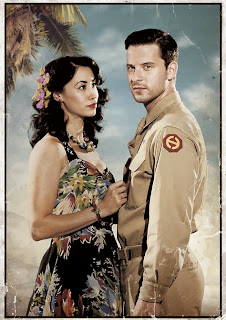 Lonsdale certainly looks the part, especially when he eventually, briefly gets his nipples out, but his voice feels thin for a West End lead and he looks a bit lost on the massive stage. He's better after the interval where a touch of humour allows Prewitt to display traces of a personality, and the second act is better in general, largely because more reprises leave less room for godawful dialogue to sneak in. From Here To Eternity looks nice enough and sounds good every time the music kicks in, but there's so much else about it left floundering. The cast recording will probably be worth a listen but the full package is seriously lacking.

From Here To Eternity by Tim Rice, Stuart Brayson and Bill Oakes, based on the book by James (not Earl) Jones, is booking until the 26th of April at the Shaftesbury Theatre.