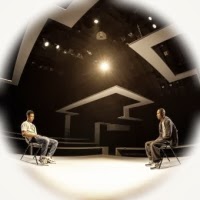 Rachel De-lahay returns to the Royal Court Upstairs after The Westbridge with her follow-up Routes, which sees two men coming from opposite directions to end up in the same place: A detention centre for illegal immigrants waiting for deportation. The more obvious route is that taken by Femi (Peter Bankolé,) a Nigerian man whose family are living legally in London, but who for reasons that are revealed later can't join them through official channels. He deals with the shifty Abiola (Seun Shote,) always demanding bigger sums of money to get him his fake passport and visa to the UK, but the attempt to slip past Immigration looks less likely to succeed the more we find out about Femi. The real heart of the story though is a route that starts closer to home, in a London hostel and halfway house.

Thrown together in the same room after each spending time in young offenders' institutions, Kola (Calvin Demba) and Bashir (Fiston Barek) grudgingly become friends. Bashir's parents were from Somalia and as a child he himself had never been formally naturalised as a British citizen. It was a technicality until turning 18 coincided with him getting a criminal record, and suddenly his status changes to that of an unwanted illegal immigrant. 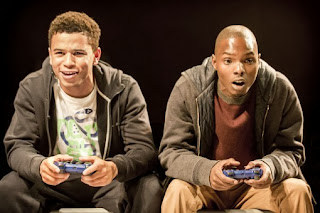 The link between the two storylines is Kola's mother Lisa (Claire Lams,) an Immigration officer who ends up dealing with Femi's case. The initial suspicion the two boys have for each other is simply a jumping-off point for an entertainingly combative friendship, their similarities as troubled boys growing up in South London are of course more important - contrasting with their very different statuses, Kola's mother's job making him very much an insider, something he tries and fails to exploit to help his friend. 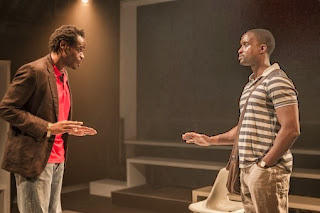 Femi's more straightforward route to becoming an illegal immigrant doesn't make for quite as interesting a story except as a contrast to Bashir's, and with the play being as short as it is I can't help wondering if it's partly there to pad out the running time. De-lahay's economy of storytelling is generally pretty effective, although one area the feels a bit rushed is Bashir's relationship with Anka (Anamaria Marinca,) the volunteer trying to get him bail from the detention centre: His romantic feelings for her are so quickly and heavily signposted, it seems unlikely she would take so long to cotton on that she needs to discourage them. 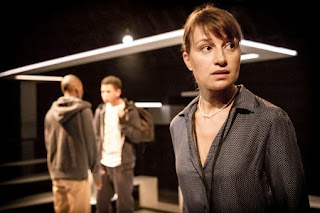 Still, De-lehay and director Simon Godwin have for the most part made Routes into an effective short, sharp shock about a couple of difficult but ultimately likeable boys caught up in an almost surreal situation. And the frustrations of a system that can leave Bashir in limbo as he can't be set free but can't actually legally be sent to a war zone either are laid bare.

Routes by Rachel De-lahay is booking until the 12th of October at the Royal Court's Jerwood Theatre Upstairs (returns only.)