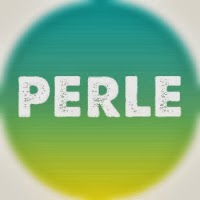 Papa-papa-papa-papa, papapa, papa-papa-papa-papa... pa! OK, so this Pearl doesn't actually come with a Dean, but it does come with one of those people I'd never heard of a year ago only for them to become suddenly prolific. Thomas Eccleshare's talents include acting, writing and looking like a toothy Ben Affleck, and he does all three in solo show Perle, loosely based on one of the oldest extant poems in the English language. The publicity rather bravely/foolishly uses the word "mime," and those potential audience members not scared away screaming by this prospect will indeed see Eccleshare spend an almost-silent hour on stage. But instead of an invisible box for him to get stuck in he has a real one, in the form of an old-fashioned large-screen television centre stage, complete with VCR underneath it and piles of VHS tapes scattered around the floor.

The original Perle poem is about a father missing his precious and flawless pearl, in other words a young daughter he lost. In Eccleshare's modernised version the video tapes are his way of holding on to the memory of his dead child, playing back events both happy and tragic and trying to find the angle that will allow him to move on. 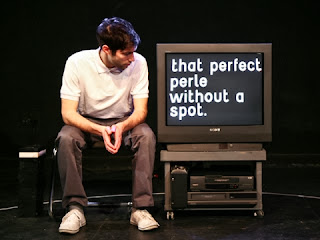 The ubiquitous use of video projection in theatre has led to some of the more creative productions having actors interact with them, and Perle is like a lo-tech version of this, the idea being to create a "live comic book." Often the screen displays dialogue, the words and thoughts of the lead character - also called Thomas - and comments from his friends, represented by some very mild audience participation. But a lot of the time Eccleshare has also animated illustrations by Serge Seidlitz, and interacts with them - putting his hand "into" the TV to grab a cartoon sandwich, standing behind it to get a full body X-ray and so on. 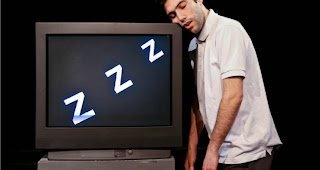 It's simply and sweetly done, director Valentina Ceschi has choreographed Eccleshare well in his interactions with music and video, although it retains a roughness around the edges - probably for the best, as you're not just being impressed by the cleverness of the performance at the expense of emotional investment. It is, inevitably, a sad little show although one that frequently raises a smile through the likeability of its conceit and performer.

Perle by Thomas Eccleshare is booking until the 3rd of November at Soho Theatre Upstairs.