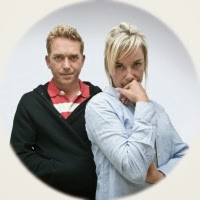 Actor Simon Paisley Day turns playwright with a familiar comic setup: Three couples go on what is meant to be a relaxing weekend together, but end up in one catastrophe after another, their friendships, and sometimes their relationships, tested. Ross (Robert Webb) is a PR man whose orange wife Rosy (Sarah Hadland) takes him at his word that he's blameless on the various occasions she's caught him with a half-naked au pair. They've rented a Welsh cottage and invited their friends Briony (Tamzin Outhwaite) and Keith (Barnaby Kay) to spend the weekend with them, in the hope that it'll help Briony, a fretful mother, relax. But her chances of calming down aren't helped when she realises that the braying Serena (Issy van Randwyck) and Charles (Nicholas Rowe) have also been invited, and when the latter couple's sexually-forward teenage niece crashes the party as well, the results range from awkward revelations to slapstick violence in Raving.

This is a pretty golden comedy cast, who make the most of the material, but as it still only raises the odd chuckle you have to wonder just what would have happened if they hadn't got so much comic experience on stage. The trouble is, it's not just the setup that's familiar. 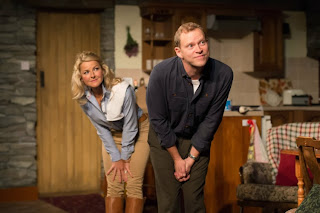 When we first meet Briony, she's using a breast pump, and the expressed milk doesn't get thrown straight down the sink as intended. Is there anyone who doesn't already know the punchline to this, about 90 minutes before we finally get it? It's a setup as familiar as Chekhov's gun - Chekhov's breast milk. Actually Chekhov's gun itself also puts in an early appearance. The heavy-handedness of plotting remains a feature all evening, and far too often suspension of disbelief is required to make the story's twists work. 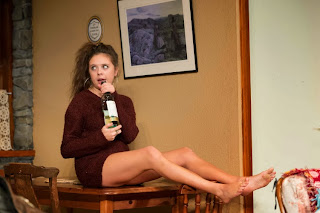 Bel Powley as Serena's niece Tabby has perhaps the most thankless task, of trying to make some unconvincing "youth" dialogue work. Her character's also at the receiving end of a rather nasty attempt to get laughs out of an older man groping a sleeping teenager, something made even harder to dismiss given how Tabby is little more than a plot device to advance the adults' crises. 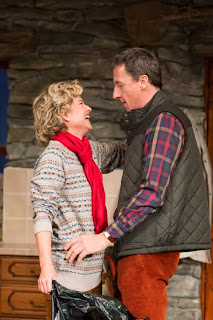 Paisley Day has created one standout comic role in Serena, Issy van Randwyck having the time of her life as the foul-mouthed posho, but even this does lead to the uncharitable thought that director Ed Hall only programmed the play to give his wife a show-stealing role. Really I was left wondering what the point of Raving was. Paisley Day is a good comic actor but hasn't really translated this into his writing, which doesn't offer much in the way of insight, and even as pure entertainment mainly recycles old tropes. There's some smiles to be had from a cast who could have done with better material.

Raving by Simon Paisley Day is booking until the 23rd of November at Hampstead Theatre.