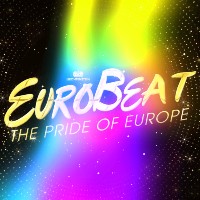 I didn't see the original West End production of Eurovision spoof Eurobeat; if I recall correctly, I had tickets to see it a couple of months into its run at the Novello, but it closed before then. Maybe a streamed version, available in the weeks leading up to the real song contest returning, will prove a better home for it: Craig Christie's (book, music and lyrics) Eurobeat - The Pride of Europe is a new version of the musical, with completely different songs to its 2008 premiere, some of them reflecting recent Eurovision trends more obviously than others. In a way this is only half a review: The original show had an audience text vote resulting in a different winner every night; stream.theatre's version has an online vote carrying on throughout its run, and will invite viewers of this first part to watch a special results show once the results have been tabulated and independently verified by the accountants of Liechtenstein.
And Liechtenstein is the host for this version of the show, following a surprise win the previous year (particularly surprising because they weren't eligible.) Marlene Cabana (David O’Reilly) is the somewhat distracted host for an evening that doesn't try to impose a narrative, but runs through a lot of familiar Eurovision tropes, both in the songs and between them. 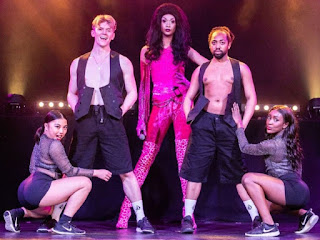 Christie does provide a couple of actual strong songs, like Christine Allado's opener for Sweden, "Semaphore of Love," where the main gag comes from the dancer in a string vest accompanying her; but things quickly go much sillier when Scott Garnham comes on to puncture some of the more clichéd Irish entries with a song called "Diddly Dee." Highlights for me included an unlikely contribution from the Vatican City (with Claudia Kariuki as lead singer Mother Morag) and Norway (Andy Coxon and Scott Paige) providing the obligatory awkward rock song, while my house's vote went to Joanne Clifton and George Olney as Lithuania, whose "This Is How I Dance" mixes the dour Eastern European duos who regularly turn up with a "Think About Things" dance spoof. 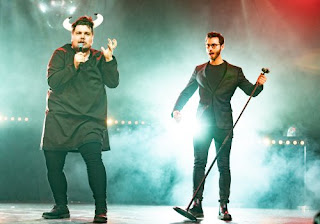 The fact that David Ribi with "Guy With a Guitar" (which he never picks up) is representing Portugal feels like a very particular commentary on their recent win and the singer's subsequent remarks. Other tropes that get a look-in include the song whose writers would no doubt swear blind its double-entendres are unintentional (Tia Kofi with "Bang Me" for Ukraine,) and Sooz Kempner with "Listen" for Romania representing the long history of nonsense lyrics doing well in Eurovision. They don't all work - the weird Noël Coward pastiche representing the UK only feels at home in the sense that it's unlikely to garner any votes - but most do, and between the songs we also have nods to the "postcards" and awkward attempts to drum up tourism for the host nation. 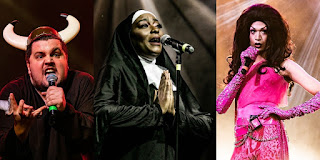 Although it doesn't have its budget (and it's a shame because being able to crank up the ridiculousness a couple more notches now and then would have been fun,) Eurobeat catches the actual spirit of Eurovision's silliness much better than last year's Netflix film. Although we've got used to these shows recorded with no live audience in the last year the silence after every song feels particularly stark - I feel like if there was ever a show where director Max Bex Roberts could have got away with adding some OTT canned audience sounds this is the one. The fact that we have to wait for the show's conclusion is a bit unsatisfying as well, but between some close-to-the-bone gags (winners of Switzerland's national wrestling championships can win chocolate, cuckoo clocks and vouchers for assisted suicide) and witty contributions from choreographer Callum Tempest this is a lot of fun.
Eurobeat - The Pride of Europe by Craig Christie is streaming until the 9th of May on stream.theatre.
Running time: 1 hour 15 minutes including interval.
Photo credit: Darren Bell.
Posted by nick730 at 16:34