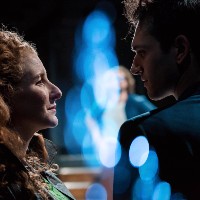 If you don't count a couple of false starts in autumn 2020, there's a nice symmetry to my first theatre trip after the third lockdown being to the Orange Tree, where I also saw my last show before the first lockdown. Let's hope it's a good omen for this reopening being the one that sticks and marks the start of things going back to normal. It is just a start though, and for now most venues are taking baby steps: For Paul Miller that means a return to one of his theatre's signature playwrights, Bernard Shaw, in intimate mode - Miller directs a double bill of short one-act comedies about marriage, extra-marital affairs and the adherence to social expectations that stops couples from making the choices that might actually mean happy lives for them. They can be booked separately but they really are very brief, and since they're very close thematically it makes sense to see them in the double bill they're calling Shaw Shorts (I mean "Shawts" was right there but I guess after the last 14 months everyone's too tired for shenanigans.)
Not too tired for shenanigans is Henry (Joe Bolland,) who's been wooing the married Aurora (Dorothea Myer-Bennett) with poetry; when she tells him that she's lost the poems and her husband may find them he's unfazed, getting excited at the prospect that she might get divorced and run off with him. Aurora is afraid of the scandal and, after a harmless flirtation, worried she might lose the husband she actually does care about. When Teddy (Jordan Mifsúd) actually turns up, his reaction isn't quite what either of them expected. 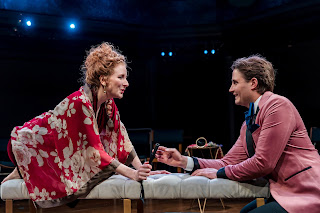 This opener, How He Lied to Her Husband, really is pretty slight, with a few trademark Shavian witticisms but the feel of an afterthought: It's perhaps meant as a companion or riposte to Shawn's own play Candida, which it overtly references several times, the play's scandalous nature cited as the inspiration for their own dalliance. To be honest I did find it got too smugly self-referential, which doesn't help the play feel like more than a sketch. 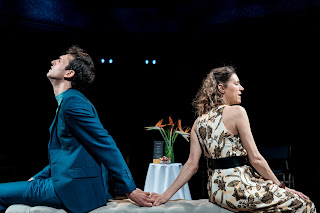 Better is the almost farcical Overruled, in which Mr Lunn (Alex Bhat) and Mrs Juno (Hara Yannas) have been on a cruise without their respective partners; following a misunderstanding that led him to think she was actually a widow, he's been enthusiastically courting her. When they reach dry land he discovers his mistake and they agree to break off their flirtation, only to find out that their respective partners (Myer-Bennett and Mifsúd) have had their own dalliance in their absence, and the two couples are starting to get confused about who's actually married to whom. 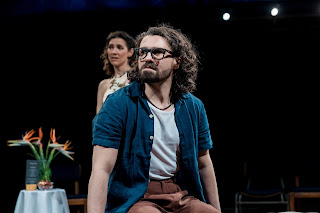 There's some pretty broadly-played comedy as the men throw aside the romantic personas they've shown so far to insist on sticking to an Edwardian propriety they're not really all that enthusiastic about themselves. But this play was actually written around the time of the First World War, and what helps make it more satisfying than the first is the women, whose terribly practical but probably scandalous solution to the dilemma feels like a precursor to the anything-goes 1920s to come. I'd call this a gentle reintroduction to live theatre for me; some entertaining moments but not exactly rediscovered classics. Perhaps just seeing actors be allowed to (however discreetly) get intimate with each other on stage again is the real thing to get the heart racing and let a little bit of optimism creep in.
Shaw Shorts - How He Lied to Her Husband and Overruled is booking until the 26th of June at the Orange Tree Theatre.
Running time: 1 hour 15 minutes straight through.
Photo credit: The Other Richard.
Posted by nick730 at 23:13