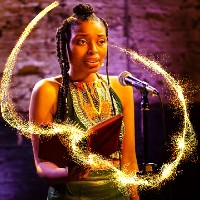 One thing I'm looking forward to about being able to see theatre in person again? People standing in the same room as you tend, by and large, not to freeze and start buffering. I'm generally lucky with my home broadband so I think the problem is with my TV's iPlayer app, which seems particularly prone to it. Unfortunately iPlayer is, of course, where you can catch the BBC virtual theatre festival Lights Up, and I eventually had to relent and just watch on my laptop because frequent interruptions don't half mess with the flow of a gentle, thoughtful piece like Dorcas Sebuyange's Buttercup. On the other hand having to make a Covid-secure staging can give rise to other creative touches, like Julia Samuels' production introducing the idea that this monologue is a live stream that had been intended to play to a live audience: Before it begins Fortune, Sebuyange's character, is trying to make sure her mother has managed to connect to the stream from home.
This is a story with family at its heart - including extended family and people who aren't relatives but are known as "aunties and uncles" out of respect, but particularly about the close Congolese family of middle child Fortune, her parents and sisters, who moved to Liverpool when the girls were very young. It's a short character piece, building a picture of Fortune as a strong but damaged character, and a family that's loving but also repressed to quite a harmful extent ("big girls don't cry" is a family motto they were raised with.) Whether it's the reason for their move to England or not isn't clear, but a violent incident (or perhaps several) when Fortune was seven is something that's haunted her ever since. 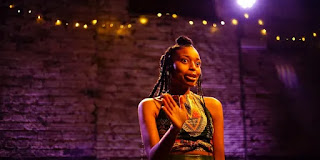 The monologue opens with her giving a trigger warning and saying she understands if people need to leave mid-show, but while it's not hard to see what kind of experience has traumatised her this is never described. Instead in what I found an interesting angle, this isn't a play about Fortune sharing her trauma with the world: It's about the process whereby she realised she had to deal with the trauma and write it down in poems. Spelling it out isn't necessary, at least not here.
Sebuyange's piece comes out of a performance poetry background, but it's not a verse play - like Inua Ellams she instead peppers her prose storytelling with short poems. Buttercup doesn't wear its anger on its sleeve but the anger is definitely there, and Sebuyange balances a respect for her background, with a dismissal of the culture of unquestioning deference to elders that allowed the "uncles" into their Kinshasa house and the "aunties" to twist the knife in their Liverpool one. It is, as I say, a gentle piece, but one that gets under your skin.
Buttercup by Dorcas Sebuyange is streaming on BBC iPlayer until March 2022 as part of the Lights Up season.
Running time: 45 minutes.
Photo credit: BBC / Tigerlilly Films
Posted by nick730 at 16:45